‘You Are Nigeria President Not Fulani’ – Ortom Tackles Buhari 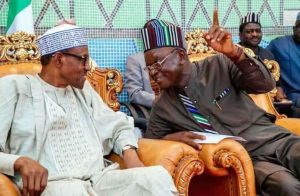 Governor Samuel Ortom of Benue State has condemned President Muhammadu Buhari over his failure to tackle the herdsmen crisis rocking the nation.

Ortom also noted that Buhari pledged to be the President of everybody and nobody in 2015 and therefore should serve the interest of all Nigerians.

He also kicked against the presidency call for the arrest of popular Yoruba rights activist, Sunday Adeyemo, well known as Sunday Igboho, who issued a quit notice to herdsmen.

Ortom said, “When I talk, I was being castigated, I was being vilified, nothing bad that was not said against me, I am this and that but the reality is here and it is not just happening in Benue State today, it is happening in the entire country.

“Why is the Federal Government being silent about these Fulani herdsmen? When will Federal Government come out and criticise and arrest herdsmen carrying AK-47? When are they going to do that? Are we second (-class) citizens in this country? Why (is) the Fulani men superior to a Tiv man? I am not their slave, a Benue man is not slave to any Fulani man in this country.

“We stand for justice, equity and fairness. Whatever is happening to a Fulani man should also happen to a Tiv man. That was why I called the Federal Government to licence me and many others to have guns, to have AK-47 too. Because if I have my AK-47 and a Fulani man is coming there, he knows that I have and he has, then we can fight each other.

Ortom stated that it appears Buhari is for his Fulani people because he has refused to give the people confidence.