Wike Reveals His PIans For The Incoming Governor Of Rivers 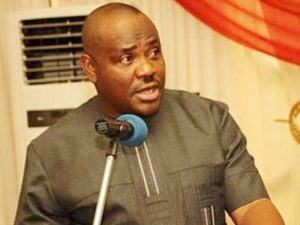 Rivers State Governor Nyesom Wike has boasted that his administration would not become a burden to the incoming government.

The governor in a statement made available to newsmen on Tuesday, January 12 by his media aide, Kelvin Ebiri, said he will ensure all projects under him are completed before his tenure elapse. This according to him will relief his successor of burdens.

Wike reportedly stated this when he led a former Secretary to the Federal Government, Anyim Pius Anyim to inaugurate the Rumuekini/Aluu Road, traversing Obio/Akpor and Ikwerre Local Government Areas.

He reiterated that no project will be left unfinished, adding that his successor would have to initiate his own projects instead of being burdened by uncompleted projects.

“Before now, APC said we are building roads only in Port Harcourt and Obio/Akpor council. Now, they can’t talk again. We have inaugurated projects in Khana, Gokana, Eleme. We were also at Akuku-Toru and Emohua. We are a government for every Rivers person and every local government.”

In another news, Ebonyi State Governor, Dave Umahi has revealed that a South-East regional security outfit is in the pipeline and would soon be unveiled.
According to the governor, the move is part of efforts by governors and leaders of the region to combat insecurity in the region, Naija News reports.