Why Lisa Montgomery Was Executed By Lethal Injection In The USA 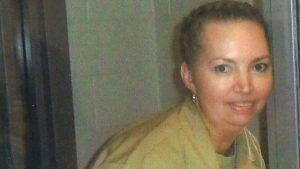 A female inmate on federal death row in the United States, Lisa Montgomery has been executed in the early hours of Wednesday, 13th January, 2021.

She was pronounced dead at 1:31 am after receiving a lethal injection at the Federal Correctional Complex in Terre Haute, Indiana, USA.

The 52-year-old was the 11th federal death row inmate and the only female to be executed by the Donald Trump administration.

Before her case, the last federal execution for capital punishment was reportedly done 17 years ago and her case makes it the first time in nearly seventy years that the US government has put to death a female inmate.

After many years of hiatus in federal executions, the Trump administration restored death as capital punishment for certain offences in the country.

Montgomery was said to have murdered 23-year-old Bobbie Jo Stinnett in the northwest Missouri town of Skidmore in 2004.

She was accused of strangling Stinnett to death with a rope and then using a kitchen knife to cut open the stomach of the lady who was eight months pregnant before taking the baby as her own.

The victim’s family demanded the court should sentence Montgomery to death for the gruesome murder of Stinnett and she was sentenced to death in 2008 by a Missouri jury.

Her lawyers however argued in court that she was mentally ill and suffered serious abuse as a child.

They also pleaded with President Trump to make an executive decision to commute her sentence to life without the possibility of parole, but their pleas and argument have failed with Wednesday’s execution of Montgomery for murder.

Meanwhile, the US Vice President Mike Pence has rejected the call from the Speaker House of Representatives, Nancy Pelosi, and House Democrats to invoke the amendment and remove President Donald Trump from office.

Recall that Pence had previously rejected calls by House Democrats to force President Donald Trump out of office.

The House of Representatives, controlled by Democrats, rushed a vote on a resolution urging the vice president to use the powers in the amendment to remove Donald Trump from power in the wake of the violent attack on the Capitol building on January 6.

In a letter to Democrat Pelosi on Tuesday, the vice-president said that he would not invoke the 25th amendment.