Why Border Closure Is Good For Nigeria’s Security – Immigration Boss 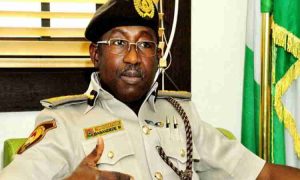 The Comptroller General of the Nigerian Immigration Service, Mohammed Babandede, says the closure of the nation’s borders is good for the nation’s security.

Naija News reports that President Muhammadu Buhari had ordered the immediate reopening of the borders on December 16, 2020, after closing it on August 2019 to curtail the illegal importation of drugs, small arms, and agricultural products into the country.

In an interview on Channels Television’s Newsnight on Monday, Babandede stressed the need for better cooperation with other neighbouring countries to tackle illegal entry and criminal activities.

Babandede also called for more border security to tackle smuggling and other nefarious activities around the border and its communities.

He noted that neighbouring countries understood the political will of the current administration when the country’s borders were shut for 12 months.

“Nigeria has spoken with a political voice through actions that is why you see greater cooperation from our neighbours.

“I am glad in terms of immigration, within the period we closed the borders, we have received a lot of people who have left our territory through the unlawful path. Those people, we have taken to court and prosecuted them.”