Why Appointment Of New Service Chiefs Is Illegal – Adegboruwa 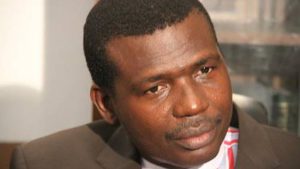 A human rights lawyer, Ebun-Olu Adegboruwa (SAN), has described the appointment of the new service chiefs by President Muhammadu Buhari as illegal.

On Tuesday, Buhari appointed heeded the calls of Nigerians by sacking the former service chiefs and immediately appointing their replacements.

In a meeting with the new service chiefs, President Buhari advised them to be patriotic and serve the country with all their might.

But in an interview with The PUNCH on Wednesday, Adegboruwa condemned the President for not following due process in appointing the service chiefs.

The lawyer asked President Buhari to send the names of the new service chiefs to the National Assembly for confirmation.

Adegboruwa said a 2013 judgment that described the appointments of service chiefs without the concurrence of the National Assembly as illegal and unconstitutional was still valid.

He noted that the new service chief cannot get fresh salaries and their actions are illegal until approval by the federal lawmakers.

He said, “There was no appeal against the judgment of the Federal High Court, which decided that the appointment of service chiefs had to be confirmed by the Senate.

“From the point of view of that judgment, the legal consequence of the recent appointment of service chiefs by the President is only an intention on his part, awaiting confirmation by the Senate.

“If their names are not forwarded to the Senate, then it would mean that their appointments are illegal and if illegal, they cannot be paid salaries and allowances for their ranks from the money appropriated by the National Assembly.

“In addition, all their actions will be illegal and unconstitutional.”