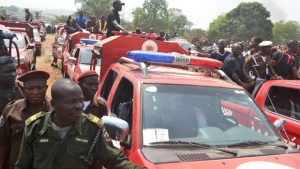 The Northern Elders Forum (NEF) says the establishment of the Security Network Agency, popularly known as Amoteku, cannot solve the insecurity going on in the South West.

According to a statement on Monday released by NEF’s Director of Publicity and Advocacy, Hakeem Baba-Ahmed, the security outfit has no power to reduce the high wave of insecurity in the region.

Baba-Ahmed noted that outfits like Amotekun are not the solutions to the security situation in the region, rather they are part of the problem in the region.

He said “The resort to regional outfits like Amotekun and other self-appointed guardians of security of communities are not solutions to these limitations. In the last few days, the nation has noticed the problems with these outfits and actions of locals who masquerade as defenders of ethnic interest.”

Baba-Ahmed said the recent clashes between the herdsmen and locals in the South-west have assumed a national dimension and must be tackled.

He said persons who break the law should not be covered or given immunity, wondering why those who attacked Fulani communities in Oyo state have not been arrested and prosecuted.

“Persons who are known to be threatening Fulani communities and attacking them are still free. The Forum hopes that the meeting will achieve the objective of assuring Fulani communities living lawfully in the South West that they will be protected, and assure all other citizens in South West States that they will continue to receive protection of the State from kidnappings and other crimes.

“At all cost, Nigerians who break the law should have no cover or immunity, whether they are Fulani or local enforcers or organizations. The Forum believes it is time for the federal government to recognize and deal with the issue of cattle herding as a national challenge, and adopt policies that will mitigate the problems it poses to the economy, farmers, herders and all communities.

“Most important, the Forum advises President Muhammadu Buhari to meet immediately with all State Governors and heads of security and law and order agencies to examine how the current tensions in the country can be de-escalated.

“Events in the South West are assuming national dimensions, and only a national approach will provide short and long-term solutions.

“The Forum appeals to all Nigerians to exercise great restraint in their comments and actions in these trying times. It appeals to leaders at all levels to contribute to the search for solutions to developing threats which will make all our lives worse,” the statement reads.

Meanwhile, the Nigeria Governors Forum (NGF) has dismissed the quit notice handed down to Fulani herdsmen asking them to leave the Southwest region of the country.

The NGF stated this at a meeting with officials of Miyetti Allah Cattle Breeders Association of Nigeria (MACBAN) in Akure, Ondo State.

Naija News reports that the NGF was led to the meeting by Governor Kayode Fayemi of Ekiti, who doubles as the chairman of the forum.

The forum urged all stakeholders to collapse into a single force and tackle insecurity in the country, adding that the order of the Ondo State Governor Rotimi Akeredolu was misconstrued and misrepresented by a section of the media.

According to the governors, Akeredolu only ordered people “illegally occupying the forest reserves in the state to quit,” while advising genuine herders to register with relevant authorities.