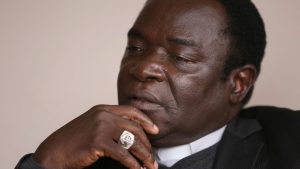 Southern Kaduna youths under the aegis of the Southern Kaduna Peoples Union (SOKAPU) has warned those attacking the person of Bishop Mathew Hassan Kukah to desist immediately.

This is as the youths warned in a statement on Wednesday that they will not hesitate to reciprocate any harm that may be inflicted on Kukah who is the Catholic Bishop of Sokoto Diocese.

Bishop Kukah had been in the eye of the storm over his 2020 Christmas day message in which he alleged that many things are wrong with the way Nigeria currently stands under the administration of President Muhammadu Buhari.

His submission has attracted several antagonists, most recently the Muslim Solidarity Forum who asked the cleric to tender an unreserved apology to the entire Muslim Ummah or leave Sokoto quietly.

Naija News recalls the group in a statement signed by its Acting Chairman of the Sokoto chapter, Prof. Isa Muhammad Maishanu submitted that Kukah’s message was an attack on Muslims.

Reacting to the submission by the Muslim Forum, the youth wing of SOKAPU warned that further attacks on the Bishop will be resisted and also called on the Department of State Services (DSS) to arrest Maishanu who signed the statement on behalf of the forum.

The youths warned that Maishanu’s statement is capable of incitement and causing unnecessary religious war in Nigeria.

The statement containing SOKAPU’s response reads: “The attention of the Youth Wing of Southern Kaduna Peoples Union (SOKAPU) has again been drawn to an eleven (11) point press statement issued and signed by one Professor Isa Mohammed Maishanu on behalf of Muslim Solidarity Forum Sokoto on Tuesday, the 12th day of January, 2021.

The statement is asking Bishop Matthew Hassan Kukah to leave the Seat of Caliphate (Sokoto), and is also trying to incite the peace-loving people of Sokoto and the North against the bishop over his Christmas message where the bishop out of passionate patriotism voiced out the obvious truth when he said: ‘Every honest Nigerian knows that there is no way any non-Northern Muslim President could have done a fraction of what President Muhammadu Buhari has done with his nepotism and got away with it’.

We are however dismayed and pained that a professor could condescend this low, throwing caution to the wind and toeing the path of religious rascality and bigotry by deliberately attempting to window dress the bishop’s message with religious colourations and further inciting the general Muslim Ummah against the bishop.

The demeaning call by the so-called professor for Bishop Matthew Hassan Kukah to ‘apologise to the Muslim Ummah or quickly and quietly leave the Seat of the Caliphate’ is not just ridiculous and unacceptable but an affront to the rights of all Nigerians who live and reside freely in all parts of the country.

We believe that the reckless statement credited to the professor does not in any way reflect the position of a responsible group such as the Muslim Solidarity Forum.”

“While we call on the Department of State Services to as a matter of urgency arrest Prof. Isa Mohammed Maishanu to serve as a deterrent to those already brainwashed and misled by his unguided statements and prevent a religious war, we’re equally urging the professor to as a matter of public interest and safety submit himself to the nearest psychiatric home for an immediate psychological examination for shamelessly trying to establish a nexus between Bishop Matthew Hassan Kukah’s message and Muslims vis-a-vis Islam.”

The SOKAPU statement declared intention to reciprocate any attack on Bishop Kukah that may put the cleric in harm’s way, noting that the Bishop’s message wasn’t an attack on any group or person but an expression of his view on the state of the nation.

“The youth and people of Southern Kaduna hereby unequivocally warn that we will not accept further attacks on the person and character of Bishop Matthew Hassan Kukah under any pretence. Neither Prof. Maishanu nor any person or group of persons can mourn more than the bereaved.”

“The bishop’s message was directed to the powers that be and could not in any way be said to have been directed to Muslims and Islam, a religion well known to profess peace.”

“The youth of Southern Kaduna, therefore, vow to reciprocate any form of attack directed or aimed at putting the bishop in harm’s way by any group of ethnic loyalists, religious extremists and enthusiasts.” the statement read

Meanwhile, the Northern Elders Forum (NEF) has warned that Nigerians should watch and guard their statements so as to prevent any form of religious war in the country.

NEF in a statement on Wednesday by its Director of Publicity and Advocacy, Dr. Hakeem Baba-Ahmed warned that Nigeria should not be subjected to further difficult circumstances capable of imposing fear in the mind of citizens.

Baba-Ahmed who expressed worries about certain disturbing comments in the polity, therefore, warned those spreading explosive and inciting statements to check their ways and desist from such acts.