‘We Are Still Prosecuting High-Profile Nigerians Involved In Fraud’ – FG 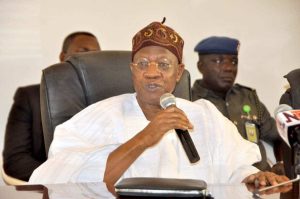 The Federal Government of Nigeria has said it has not stopped on fact-finding and prosecution of high-profile Nigerians involved in fraudulent acts.

Minister of Information and Culture, Lai Mohammed, stated this on Friday morning, February 5 while featuring in a live programme on TVC.

According to the minister, there were many libel cases already filed against him by Nigerians. Mohammed revealed further that President Muhammadu Buhari led government has not relented in the fight against corruption.

The minister said though details of the prosecution of politicians and former government officials charged with various corrupt allegations are not made public, the government is still on course on ensuring that they face the wrath of the law.

He said, “We are on course; we are very much on course. The programmes of activities that the various anti-corruption agencies of government such as the ICPC (Independent Corrupt Practices Commission), Code of Conduct Bureau have been embarked upon.

“But more importantly is that when people talk about corruption, a lot of corruption comes when the system is opaque, not transparent. That is why we were able to identify that 40% of the scoring methodology is around the ease of doing business and unless you address that, you will also be scoring low. That is why we embarked on Ports Reforms. Ports Reforms are very important, it will be slow but it will help the narratives.

“In addition to these preventive measures in the system, we have not halted the prosecution of high-profile Nigerians who are involved in fraud, we’ve not stopped. Of course, some of these things are not what you can say on air because as I speak today, I have various libel cases against me but I know that we have not stopped but we should not focus our attention on the high-profile cases.

“Corruption is something that is a bit systemic and that is why we are taking that approach from the very beginning.”

Naija News understands that Nigerians on social media had in the past condemned Mohammed of reeling out fallacious propaganda under the guise of defending the slips of the regime of the President Muhammadu Buhari.

Meanwhile, the pan-Yoruba socio-cultural organisation, Afenifere, has outrightly rejected the extension of the tenure of the Inspector-General of Police, Mohammed Adamu.