We Are Ready To Receive Sunday Igboho In Ogun State – Govt 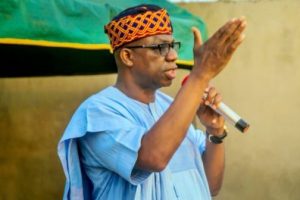 The Ogun State government has revealed that it is ready to receive Yoruba activist, Sunday Adeyemo, popularly known as Sunday Igboho in the state.

The Special Adviser on Public Communications to Ogun State Governor, Dapo Abiodun, Remmy Hazzan made the submission on Saturday.

Hazzan while speaking with PUNCH Live however quickly clarified that Igboho was welcome for consultations on how to solve the security challenges in the state.

“Anybody who is hoping to help us with the security situation is welcome. Not only Sunday Igboho, whoever has what it takes to help us get security right is welcome in Ogun State,” Hazzan said.

Igboho, who gained much national prominence after he issued a seven-day quit notice to herdsmen accused of criminal activities including kidnapping, banditry, and others in the Ibarapa area of Oyo, declared recently that his next stop will be in Ogun State as well as some other South West states where similar things are reported.

When asked if the state government was ready for the ‘visit’ by Igboho, the governor’s aide said Igboho “would be welcome for consultation”.

He noted that while Igboho was not constitutionally empowered to issue quit notices, the helpless security situation in many parts of the country pushed him to self-help and declaration.

Hazzan, therefore, appealed that restructuring be done in such a way to give state governors control over the security apparatus in their states in order to better secure the lives of residents and citizens.

It will be recalled that Sunday Igboho, had warned criminal herdsmen in Ogun State to leave immediately, revealing in a viral video that the South West state will be his next destination to flush out criminal herdsmen kidnapping and killing innocent Nigerians.

According to the Yoruba activist, he has heard about the criminal activities of herdsmen in the state, saying that such will not be condoned again.

He said: “What many people do not know about this whole issue is that it was God that wanted to liberate Ibarapa people from the captivity of herdsmen that I went there.

“The suffering that the people of Ibarapa were going through was brought to the fore by the death of Dr. Aborode, Aborode’s death exposed a lot of things going on in that area.

“Many who have been killed and kidnapped there is not small. We however thank God that normalcy has been restored gradually.

“By the grace of God, the remaining issues in Ogun state will be resolved, all criminal herdsmen in Ogun state should get prepared I am coming.”