US: Joe Biden Threatens To Sack Any Disrespectful Aide 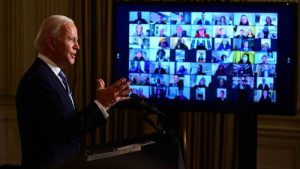 United States President, Joe Biden, on Thursday, warned his new appointees against disrespecting their colleagues the 46th President noted that he would not hesitate to fire such individual.

The 78-year-old President stated this while addressing nearly 1,000 appointees after his inauguration ceremony on Wednesday.

Biden during the virtual ceremony in the White House’s State Dining Room, said, “I’m not joking when I say this. If you’re ever working with me and I hear you treat another colleague with disrespect, talk down to someone, I promise you, I will fire you on the spot.”

“On the spot. No ifs, and, or buts. Everybody is entitled to be treated with decency and dignity. That’s been missing in a big way in the last four years.”

“Cathy’s gone through all your backgrounds, talked to me about you. I’m confident you can do it.”

In a related development, barely two days into the tenure of United States President Joe Biden, a Republican congresswoman, Marjorie Taylor Greene, has filed articles of impeachment against him.

Recall that Democrat Joe Biden and Kamala Harris were sworn-in on Wednesday, 20th January as President and Vice-President of the United States of America.