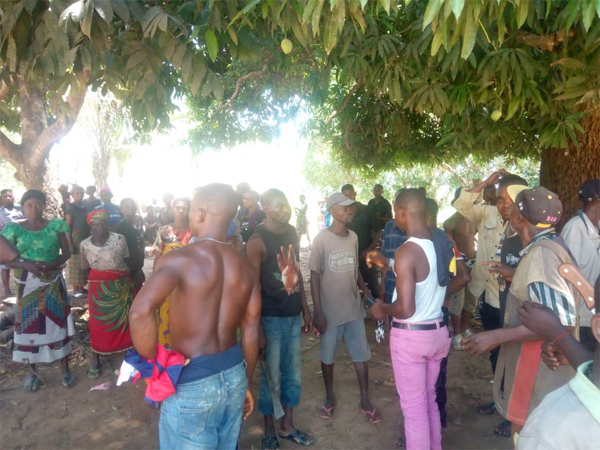 …Only 4 persons were killed – State govt

…They were not herdsmen – Ebonyi govt

…I haven’t seen my husband; my husband’s brother was killed — Victim

…People sleeping had their heads chopped off — Survivor

BARELY 24 hours after the South-East Governors Forum announced formation of its regional security outfit, EbubeAgu, some Ebonyi villages were again in focus yesterday as many people were feared killed, following an attack allegedly carried out by some assailants on the villages at Ngbo in Ohaukwu Local Government Area.

But the state government controverted survivors of the attack who claimed many people died, saying only four persons lost their lives.

This attack came just two weeks after 25 persons were killed in four communities in the state by suspected herdsmen.

While the state government attributed yesterday’s attack to indigenes of Agila community in Benue State, villagers in Ngbo community who spoke to newsmen, described them as herdsmen.

When newsmen visited the affected community, people were seen running away from the affected villages as sporadic gunshots were  still being heard within the area, even as houses were burnt down.

Some victims of the attack were said to be taking refuge in Ukwu-Agba market square in Ngbo community.

The traditional ruler of Umuogodo-Akpu Community in Ngbo, Eze Godwin Ugadu-Ogba, explained that he heard  that herdsmen were killing his people.

“I am the king of this community and my name is His Royal Highness, Chief Godwin Ugadu-Ogba. Early morning today (yesterday), I heard rumours that herdsmen were chasing my people, killing them, burning their houses.

“So, I called the Chief Security Officer, Leonard Igwe, to invite security men and find out if it was true. Within a few minutes, I also heard the army and other security men were going to the scene of the attack.

“I am expecting that they will visit me before going but I have not seen them. Then, I’m also waiting for information from subjects living nearby that place because I am too big to tell lies. I need correct information.

“So, I am still waiting for their report but what I know is that whether it’s herdsmen or Agila people of Ado Local Government Area of Benue State, my people  are being killed, their houses are burnt and their properties destroyed. That is all I know.

“Otuebu Elebe, Iguduobu and Obodocha villages were affected. I think when they heard that the military were coming, they ran back, according to information given to me.  Many people said they saw dead bodies.

“Many people sustained injuries — on their heads, on their bodies and these are according to information given to me and I can say it is true because my house boy who went there came back and reported to me but I’m still waiting for information from the very place that was affected.”

It was gathered that the attackers invaded  Ebele village through Agila community, a border town between Ebonyi and Benue states.

Vanguard learned that the attackers started shooting sporadically in the air with the intention to sack the residents of the area. Residents of the affected villages have fled their homes.

Emegha said there was still confusion as to whether the attackers were herdsmen based in Ebonyi or Agila people in Benue State who have an age-long communal dispute with Ngbo community.

Emegha: “Some people said it is Agila people, while others said it is herdsmen. But we don’t know the actual people that carried out the attack. We can’t say exactly what happened. This happened in the night and we heard about it this morning.”

Commissioner of Police Ebonyi State command, CP Garba Aliyu, also confirmed the attack, adding that officers of the command had been deployed to the conflict zone to repel the attackers from the area.

“We are yet to get any report from there. I have not been around and so I’m waiting for details from my officers,” he said.

It was gathered that many have allegedly lost their lives, following the development as houses of innocent indigenes of the area had been burnt down.

Ebonyi State government had last Wednesday, put modalities in place to set up 1,000 vigilante groups across the state.

However, the state government said in a statement signed yesterday by the Chief Press Secretary to the Deputy Governor, Dr. Kelechi Igwe, insisted that the attackers were not herdsmen.

The statement read:  “Ebonyi State Government has received with dismay violent attacks on the people of Umuogudu Akpu-Ngbo Community in Ohaukwu Local Government Area of the state in the early hours of Monday, April 12, 2021.

“The general public is hereby informed that preliminary investigations have indicated as follows: That the attack was not carried out by herdsmen as being speculated in different quarters.

“That the Government of Ebonyi State is in touch with the leadership of the herdsmen (Miyetti Allah) who denied involvement in the attack.

“That the leadership of the herdsmen has assured government and people of Ebonyi State that they will not on any account perpetrate attack on any part of Ebonyi State.

“That the recent attack on Ngbo is linked to the age-long crisis between the community and   their Agila neighbours of Benue State.

“However, the Deputy Governor of Ebonyi State, Kelechi Igwe,  has swiftly responded by directing the military and Police to move into the community to repel the attack and   restore peace.

“The general public and in particular, the people of Ngbo are requested to remain law abiding and avoid reprisal  as government is working hard to restore normalcy to the affected community.

“Please be assured of the readiness of the governor, David Nweze Umahi led administration to secure the lives and property of citizens at all times.”

I have not seen my husband; my husband’s brother was killed —Victim

Some victims of the attack are still taking refuge in various locations in the area as the affected villages are said to be in mourning.

A survivor, Ogba Ngozi, said she was yet to see her husband, even as her husband’s brother was killed during the unfortunate incident.

“Government should please come to our aid and stop these killings because we are almost finished. I have not seen my husband and my husband’s brother was killed. Their names are Chidiebere and Emmanuel Nwalinwajoku.

“We were inside our houses and  before we woke up early this morning, we were hearing gunshots everywhere and they were coming near us and we started running. While we were still running, we heard that they had started killing, even my neighbour was killed.

“That you saw us here is because the situation has calmed down and we went to take some food to eat. When we got home, we discovered that our houses had been burnt. They killed one man called Abannani. They destroyed our properties, like sewing machines, motor bikes etc.

“Government should come to our rescue because there is no life in us again. We are going to take refuge somewhere and all my children have been on the run since morning (yesterday). No food or water. I’m still looking for them. My name is Ngozi Ebenyi Onwe.”

Another survivor, Christopher Elechi Agu-Elebe, explained that the attack took place in the morning, perpetrated by Agila people.

“Early this morning (yesterday) at about 6:15am, the people of Agila attacked us. They started shooting and before we could check to find out what was happening, they had killed so many persons.

“Many houses were burnt. We are just coming back from where we went to pick our village man who was killed. His name is Emmanuel Ali.

“We could not ascertain those who carried out the attack because the gunmen were armed but we have a common boundary with the people of Agila and we have this age-long land dispute with them. They came from there and went back there.”