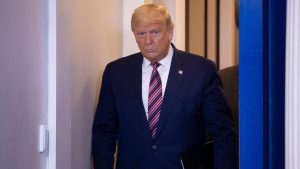 The immediate past US President Donald Trump announced Sunday he had picked two lawyers to head his defense team days before his historic second impeachment trial.

Trump’s Senate trial is due to start on February 9, but he had reportedly parted ways with several members of his initial legal team just a day ago.

His lead lawyers, David Schoen and Bruce L. Castor, Jr, are “highly respected trial lawyers” with backgrounds in criminal law and defense, according to a statement from Trump.

Schoen has represented Trump ally Roger Stone and said he was in discussions to join the legal team for Jeffrey Epstein in 2019 days before the disgraced US financier killed himself while in jail on allegations of trafficking underage girls for sex.

Castor previously served as the district attorney for Montgomery County, Pennsylvania, where he declined to push forward with a case when US comedian Bill Cosby was accused of sexual assault by Andrea Constand.

The case moved forward under Castor’s successor and Cosby was convicted in 2018.

Schoen had already been working with the defense team, and both he and Castor “agree that this impeachment is unconstitutional,” Trump’s statement said.

The trial of the former president for alleged “incitement of insurrection” over the storming of the Capitol by his supporters has exposed a rift between Trump loyalists who dominate the Republican Party, and its moderate wing.

“The Senate trial… is going to call all Republicans to take a position more clearly,” Arkansas Governor Asa Hutchinson told ABC’s “This Week.”

He added: “We’ve got to have a regard for those people that supported Donald Trump… But at the same time, we don’t want to gloss over the terrible actions that happened at the Capitol.”

Trump looks increasingly likely to avoid conviction due to party support in the Senate — where all but five Republicans already backed an attempt to throw out the case on constitutional grounds.

But the trial is still sure to see battle lines drawn over who controls the party following Trump’s first-term defeat.