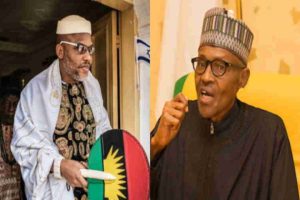 The leader of the Indigenous People of Biafra (IPOB), Nnamdi Kanu, alleged in a post on his social media that the individuals had each played a role in what the country has become today.

Kanu noted that the leaders went to school and many of them are professors while some claimed to have direct access to God but yet they were united in hatred and watch President Muhammadu Buhari destroy the nation’s economy as back as 1983.

The IPOB leader added that the under listed persons have never for once defend Nigeria or gave an interview on how to rebuild the nation’s economy, education, power, health, etc.

He alleged that they saw everything Buhari did both in the past and present, yet they allow him to open the gate of hell on innocent Nigerians since he lost his presidential bid in 2011. Kanu further accused the leaders of turning a blind eye against Buhari’s past sins to hate former president, Goodluck Ebele Jonathan, who according to him is one among the few Nigeria leaders that actually wanted Nigeria to work.

Kanu again accused the former US President Barrack Obama and former UK Prime Minister David Cameron and all members of the Redeemed Christian Church of God of contributing to kicking out Jonathan to install Buhari in 2015.

The IPOB leader stated categorically that villages, cities, and towns greatly affected by attacks by Fulani herdsmen should hold these people responsible.

“They were more than 20 years old in 1983 when Buhari shot himself to power. They saw Buhari destroy the economy in 1983. They saw the role Buhari played in Abacha’s government.

“They read all the threats of violence by Buhari against the nation. They saw Buhari harass Lam Adesina the Oyo State Governor due to Fulani herdsmen conflicts with locals in Oyo State.

“They saw Buhari lead the sharia protest that claimed the lives of innocent Nigerians in 2001.

“They saw Buhari and his minions open the gate of hell on innocent Nigerians when he lost the presidential election in 2011.

“If Buhari was not speaking and defending his Fulani heritage he would be fighting to defend his religious heritage.

“Never for once did he defend Nigeria or gave an interview on how to rebuild the economy, education, power, health, etc. They saw everything this man did. They knew him too well to miss the little details of his violent life.

“But they were united in hatred. Hatred for Goodluck Ebele Jonathan. One among the few Nigeria leaders that actually wanted Nigeria to work.”

The clergy in a statement made available to newsmen on Monday morning, January 25, warned Yoruba freedom fighter, Sunday Adeyemo, better known as Sunday Igboho over his fight against Fulani herdsmen in the South-West region of Nigeria.