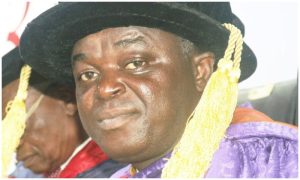 The Deputy Vice-Chancellor of Anchor University, Lagos, Prof. Johnson Fatokun, who was recently abducted and released by kidnappers has narrated his experience with his abductors.

Naija News recalls that the DVC of Anchor University, a faith-based tertiary institution in Ayobo, Lagos, owned by the Deeper Christian Life Ministry, spent three days in the den of kidnappers, who abducted him last Monday.

On his way to his base in Keffi, Nasarawa State around 9 pm on Monday after dropping off his children, who were resuming their academic studies in Jos, Fatokun was attacked.

He stated, “We heard a gunshot at the back as the hoodlums came out in front. They blocked vehicles that had entered their trap and shot several bullets at my vehicle.

“They asked everybody to come out and lie down. They requested my gun and I told them I did not have any. They searched everywhere and saw my ID card. They also took my ATM cards. They took me through the bush and asked, ‘Do you know what just happened to you?’ They said I had been kidnapped. They assigned some men to me.”

“They said I should let them know who they should call, because all they wanted was money. They said they could not leave me, because they were responsible to the people, who lent them the guns and they must pay back. They carried sophisticated weapons. They spoke Fulfulde; they are Fulani. One of them spoke English faintly,” he added.

The Lagos varsity DVC stated that his abductors reached out to a pastor in his church in Keffi and demanded N20m ransom for his release.

The 55-year-old recalled that the abductors threatened to kill him if the money was not delivered the following day.

“They went to somebody’s farm and harvested yam. They asked me if I would eat, but I declined. We slept in the open till around 5/6am then continued the trek to the mountainous part of the forest,” he said.

“They switched on my phone anytime they wanted to continue negotiation with the pastor. When the discussion did not go down well at a time, their leader came and said they would transfer me to the Boko Haram camp and he was no longer interested in money.”

He said after some discussions, the gunmen released him on the third day.