The FA Cup produced yet another cracker as Premier League title contenders Manchester City visited the Jonny-Rocks Stadium (sadly without John Stones) to face League Two side Cheltenham Town. Pep Guardiola’s side were expected to coast home and advance with ease, but the side with the meanest defence in the fourth-tier last season proved to be a tough nut to crack.

Cheltenham battled hard in the first half and went into the break level, before opening the scoring through Alfie May in the second half. City did survive the scare in the end, though, as late goals from Phil Foden, Gabriel Jesus and Ferran Torres saw them come away with a 1-3 win.

But, the Robins pushed the Mancunian giants further than even some Premier League teams, so here is an analysis of their spirited performance, City’s initial struggles and how they overcame them: 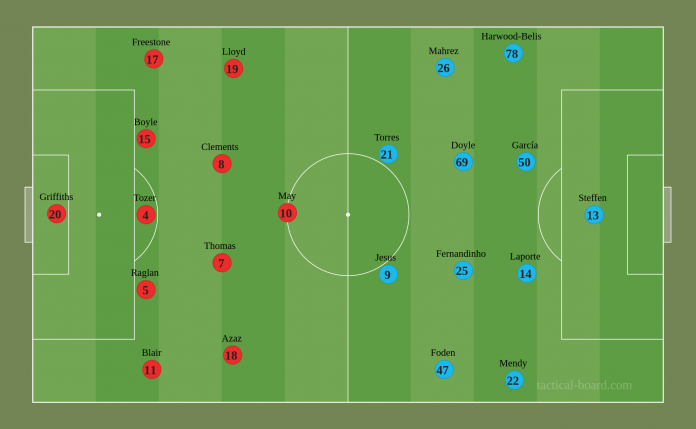 Cheltenham Town fielded a 5-4-1 with Joshua Griffiths, who was fresh off conceding directly from an opposition goal-kick in the weekend, standing between the sticks. Their resolute defence included Matt Blair, Charlie Raglan, Ben Tozer, William Boyle and Lewis Freestone, while Finn Azaz, Chris Clements, Alfie May and Conor Thomas were in front of them. Alfie May was left all alone up front.

On paper, Pep Guardiola deployed a 4-4-2 for Manchester City, but of course, things were very different in practice. Zack Steffen had a back-four of Taylor Harwood-Belis (used as a right-back this time), Eric García, the returning Aymeric Laporte and Benjamin Mendy. The midfield line saw Riyad Mahrez and Phil Foden on either flank, while EDS midfielder Tommy Doyle joined Fernandinho at the very centre of the park. Ferran Torres partnered Gabriel Jesus at the sharp end.

Manchester City had a poor first half, as they failed to break down the Cheltenham defence and looked quite blunt in attack. 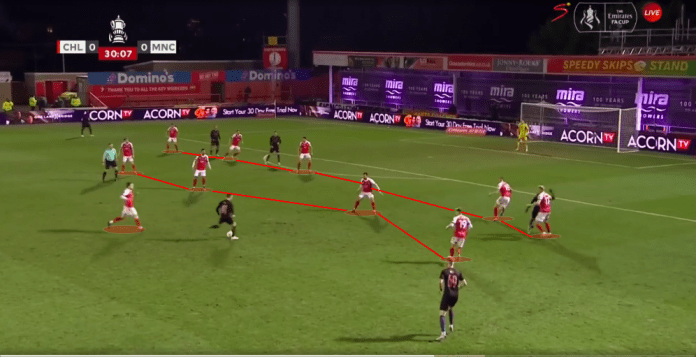 The Robins defended in their compact 5-4-1, maintaining a low block and closing down space in the central areas.

Manchester City used a 4-4-2 in defence, in just the way that they lined up.

One of City’s main tactics to break down the Cheltenham defence was the usage of long crossfield balls, particularly from the left to right. In doing so, they could just skip over the Cheltenham midfield without having to play through them. 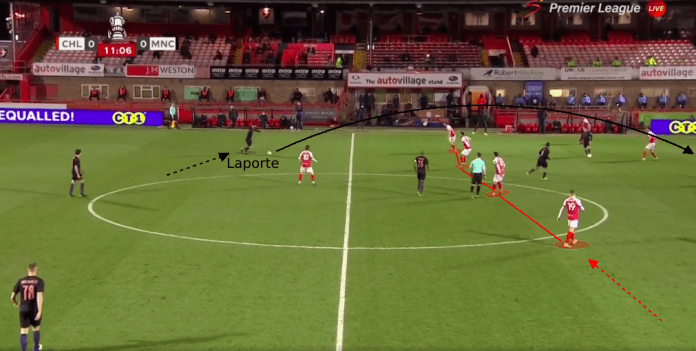 Laporte’s long-passing ability was useful in this. First of all, he would take the ball out wide to the left, drawing the Cheltenham low-block in that direction. With Mahrez hugging the touchline on the opposite side, he would remain an open option for the French defender to pick out with a crossfield ball. 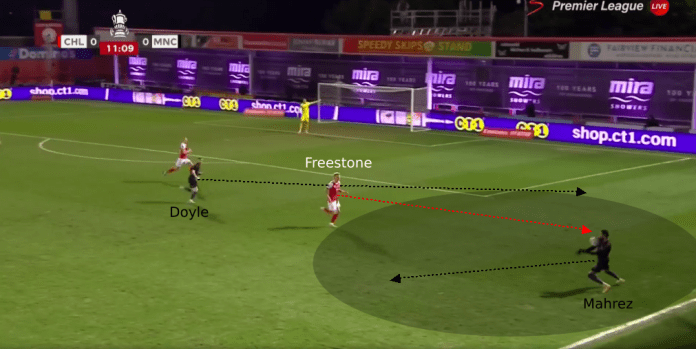 With Mahrez receiving the ball in space on the wing, Freestone, the Cheltenham left wing-back, would have to quickly close him down and prevent him from running along the byline. This in turn allowed him to cut inside and onto his favoured left foot, taking the defender with him. Meanwhile, Doyle made a run across to occupy the space vacated by his winger. From such a position, Mahrez could do one of two things: 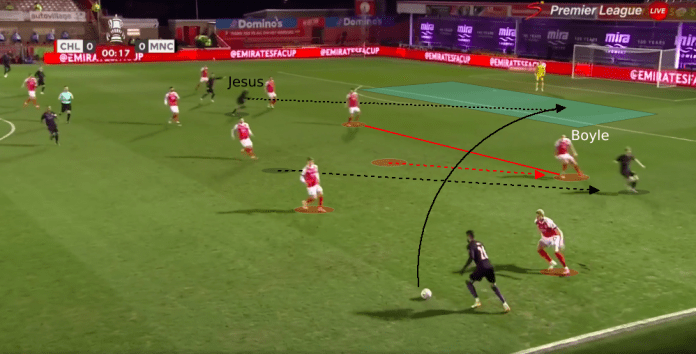 The first one was to feed a through ball into the box. Doyle’s movement from midfield dragged Boyle, Cheltenham’s left-sided centre-back slightly too wide, opening up an angle for Mahrez to play a pass into the space in behind the defence.

The second option was to move infield and pass the ball to Fernandinho, who was positioned right in the middle of the park. 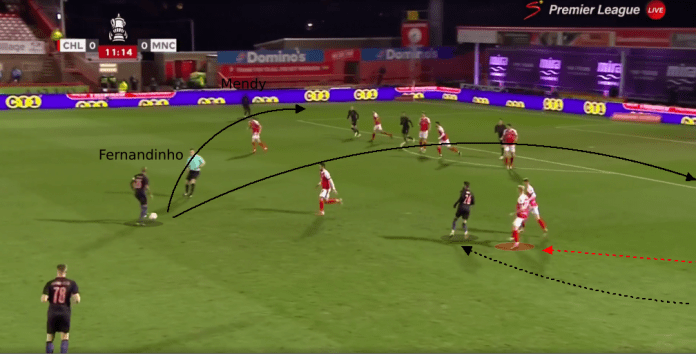 Fernandinho too had a couple of choices with time on the ball since Cheltenham had backed off to deal with the long ball. He could chip the ball across to the left for Mendy, but the better option usually was Doyle on the right, since Mahrez dragged Freestone inside and created a fair amount of space for the young midfielder. 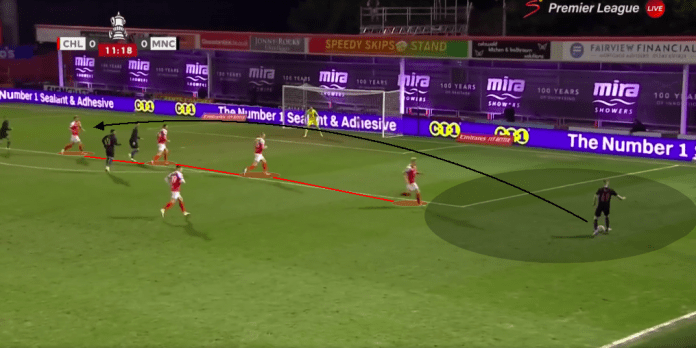 With space and time on the ball, Doyle was expected to whip a ball across the face of goal and in behind the defence, begging a teammate to attack it. His deliveries were great and City got a couple of good shots away from these situations, but they failed to score, with a heroic goal-line clearance among Cheltenham’s escape acts.

While these tricks worked early on, Freestone slowly started to get the hang of Mahrez’s movements. He made two tackles and gave away three fouls in the first half, cutting off City’s main attacking route.

There are very few teams in the world that would prefer a throw-in to a corner, but Cheltenham are one of them. Tozer’s launches must have brought tears to Rory Delap’s eyes, but his son might have been crying more when one of those throws led to a goal.

If Pep Guardiola mentions your long throws in his pre-match press conference, you probably are pretty good. Tozer’s technique saw him take a couple of strides’ worth of a run-up, before launching the ball just behind his head.

His technique meant that he got an insane amount of elevation along with some good speed and distance on his delivery, making it very difficult to deal with.

The goal was a very well-worked set-piece. 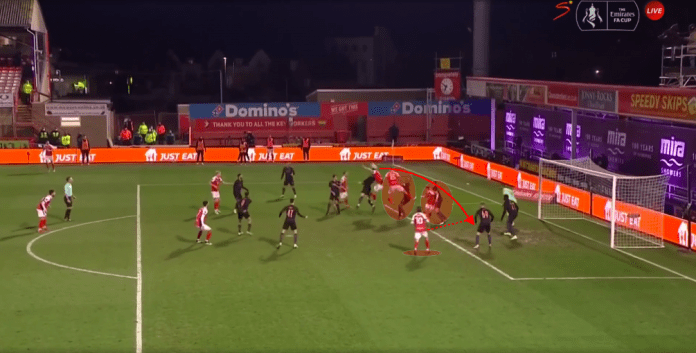 George Lloyd won the first header, and with Laporte and Fernandinho occupied by a Cheltenham player, they couldn’t prevent the ball from passing them. Still, both Doyle and Mendy were positioned in the six-yard box, but May’s angled run meant that he was still out of their vision when the ball was flicked on, and he could ghost in and poke it home.

One of the oldest tricks in the book beat the Manchester City defence, but the visitors bounced back.

Things clearly were not working for City in the first half, so changes had to be made, both in terms of personnel and tactics. Guardiola did just that in the second half, and eventually, it all clicked.

The first of those changes saw Mahrez move into a central position, with Torres taking his spot on the wings to freshen things up and give Freestone a new challenge at left wing-back.

With City looking even more clueless after conceding, Guardiola made two changes as he brought Rúben and İlkay Gündoğan on for the two youngsters – Harwood-Belis and Doyle – in the 68th minute. 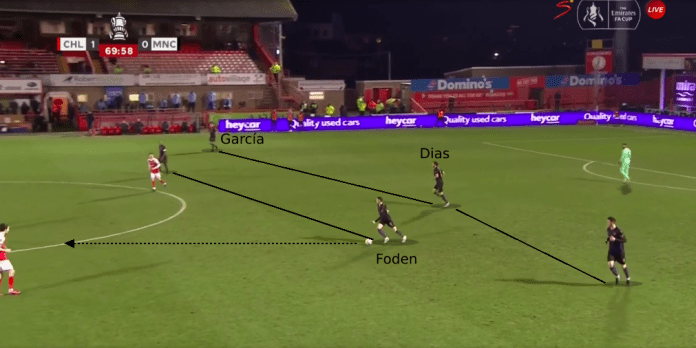 The first change in the system saw Dias move into the centre of the back-three in possession with García going to the left. Further, City switched to a 3-2 in the buildup as Foden dropped into midfield alongside Fernandinho, and he was tasked with carrying the ball forward.

As City entered the opposition half, they transitioned into almost a 3-1-2-4, with both Foden and Gündoğan pushing forward line while Fernandinho sat back.

Guardiola made one more change in the 77th minute, as he brought Mendy off for João Cancelo. This too brought a change in the system. 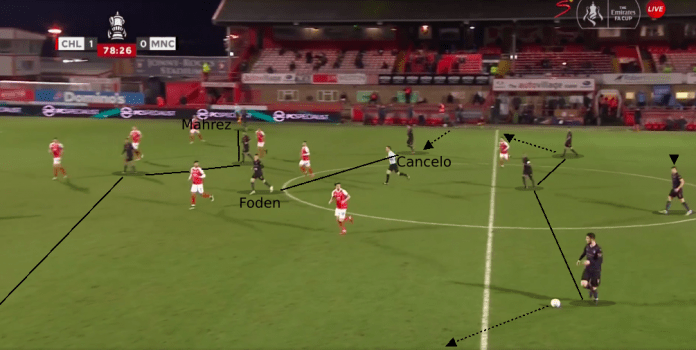 Desperate for a goal, City switched to a 1-3-2-4 as the two wide centre-backs pushed up and moved towards the touchline while Cancelo drifted into midfield as an inverted full-back. Mahrez moved back to the right side, while Torres slotted into Mendy’s position on the left.

As City got further forward, Foden pushed ahead, while Cancelo stayed back to make a 3-2-5. The two combined along with Torres on the left for the opener when Cancelo received the ball from the Spanish international in space outside the box, and he found the young Englishman with his cross.

A chipped ball over the defence led to City’s second, and as Cheltenham pushed for an equaliser late on, they left yet more gaps at the back to allow the Mancunian giants to bag a third following some slick play between Cancelo, Gündoğan and Torres.

Looking at the scoreline, you might think that this was yet another routine victory for City with Cheltenham getting the odd goal, but in reality, it was anything but that. The Robins should take immense pride from their performance as they pushed one of the best teams in England, and on current form, even the world to their very limit. Yes, this wasn’t City’s A-team, but it was a very good side nonetheless.

Pep Guardiola’s initial experiment failed quite badly, but after a few frantic changes, his side cracked the Cheltenham code. Most crucially, they advanced to the next stage, which is all that matters at the end of the day.