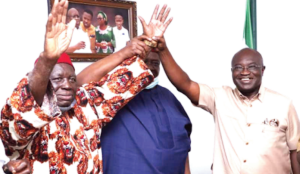 Governors of the South-east states have reacted to the election of Prof. George Obiozor as the new President-General of Ohanaeze Ndigbo, the Igbo apex socio-political organisation.

The former Ambassador to the United States and Israel polled a total of 304 votes to defeat his rivals, who polled 304 and 15 votes.

Speaking on behalf of the South-east Governors’ Forum, Chairman of the forum and Governor of Ebonyi State, Dave Umahi, pledged to work with Obiozor to move the organisation and the South- East region forward.

The governor lamented that South-east governors have been singled out for castigation because they have always supported the unity of this country.

Umahi, however, commended the immediate past President General, Nnia Nwodo, for conducting a successful election in spite of the efforts of the Igbo detractors.