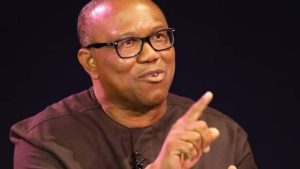 A former Governor of Anambra State, Peter Obi, says some Nigerian leaders lack the capacity and character to lead the country.

Speaking at the second edition of the ‘Never Again Conference: 51 years after the Nigerian-Biafran civil war’ on Thursday, Obi noted that some leaders in the country are incompetent and corrupt.

The 2019 vice-Presidential candidate of the Peoples Democratic Party (PDP) opined that Nigeria is still going on the same road that led to the civil war. He also urged Nigerians to pray against any form of war in the country.

He, however, all Nigerian leaders to sit down and pull the country out of corruption before it destroys the country.

The former lists incompetence, insecurity, unemployment, and corruption as factors affecting the growth of Nigeria.

Obi said: “When we say Never Again, we need to be prayerful. We are still going on the same road that will lead us to that same destination. We have incompetent leadership with total lack of capacity and character”.

He added: “Corruption is worst today than it has ever been. Nigerian elites need to sit down and pull the country out of the mess or it will consume all of us”.