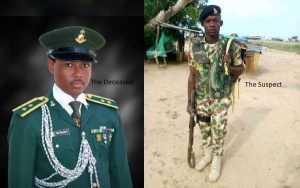 A military court-martial sitting in Maiduguri, the Borno State capital on Tuesday, ordered a soldier, Azunna Maduabuchi to death by firing squad for killing his commander, Lieutenant Babakaka Ngorgi.

The military court ruled after finding him guilty that the decision follows the provision of Section 106 of the Armed Forces Act.

Maduabuchi was said to have opened fire on the Lieutenant, fired eight rounds at the officer, at close range, killing him on the spot shortly after the troops returned to their base after an operation against Boko Haram Terrorists according to HumAngle reports.

The officer was said to have gotten married in December 2019 and was talking to his wife Hauwa Alhaji Kolomi on the phone when the soldier fired and killed him at close range.

Ngorgi was the Adjutant of 202 Tank Battalion Bama Northeastern Nigeria.

Trooper Maduabuchi has now being sentenced to death by firing squad for killing his superior for refusing to grant him a welfare pass.

Meanwhile, troops of the Operation Sahel Sanity have eliminated 10 bandits during recent operations in Katsina State.

One soldier, however, died while two others were wounded as confirmed to newsmen on Tuesday in a statement by the Acting Director, Defence Media Operations, Brigadier General Bernard Onyeuko.

He added that the wounded soldiers are responding well to treatment at the hospital.

According to the acting defence spokesperson, the troops also arrested two associates assisting the bandits, and recovered some weapons during the operations.