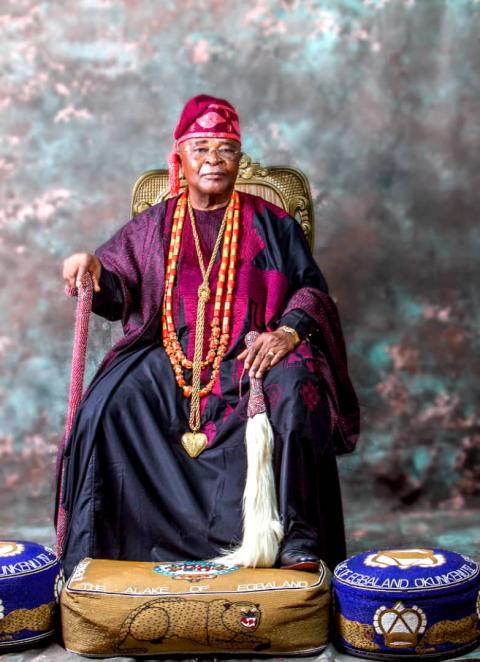 UNEASY calm has enveloped Orile-Imo Township in Obafemi/Owode Local Government Area of Ogun State following the refusal of the Alake and paramount ruler of Egbaland, Oba Adedotun Gbadebo, who refused to fill the vacant stool of the traditional ruler of the town.

Investigations by Vanguard revealed that after the screening of all the four candidates that indicated interest in the vacant stool of the Olu of Orile-Imo, and voting to choose one out of them, there were petitions from different quarters against the election of Chief Matthew Alawode as the Olu of Orile Imo-elect.

The 11-man committee was advised to be fair to all contestants during the screening.

Aside from this, a three-man sub-committee was constituted to ascertain the authenticity of the information which all the contestants provided during the screening exercise.

The sub-committee confirmed that all the contestants were qualified to contest for the vacant stool of the Olu of Orile Imo, as they hailed from Orile-Imo through their mothers.

After the screening exercise, an election was held in the presence of representatives of all the contestants.

Though all representatives of all the four contestants signed the election result to show their satisfaction, but it was gathered that Mr. Sogaolu rejected the voting result.

The Imo Township Traditional Council alleged that the action of Mr. Sogaolu caused apprehension, tension and uprising in the community.

The traditional council noted that it does not want such an ugly incident to repeat itself in the community, adding: “We cannot go against the wishes of our people in the selection of Chief Alawode as the Oba of Orile Imo-elect.”

The Council, in a letter of appeal, addressed to Oba Gbadebo, dated July 1st, 2020, said the Imo Traditional Council, in its wisdom, has selected a candidate for the seat of Olu of Orile Imo in the presence of all observers.

The council said: “We have noticed moves from some quarters to force on us, a not- acceptable candidate to the majority of people in the community.

“Being selected as an Oba is the will of God and not what man can enforce. Other contestants for the same seat have congratulated the selected person to the point of promising to support his reign when eventually crowned.

“Our request is to plead with your Majesty to uphold the truth and not allow the highly exalted stool of Olu of Orile Imo to be bought with money. We know that posterity will judge us for whatever choice we make and that is why we are choosing the right path.

“Conclusively, we, the five ruling houses in Imo community, comprising Isalu/Ilukan, Osoba, Ilaro, Ilisa and Ijigun families are totally in support of the selection of Chief Matthew Ayedun Alani Alawode as Olu of Orile Imo.”

Council chides Sogaolu
Also, in a letter of appeal written by Imo Township Traditional Council, addressed to the Alake of Egbaland on the planned installation of new Oba, dated 1st February 2021, alleged that Mr. Sogaolu had once petitioned the Commissioner of Police leveling grievous and false criminal allegations including armed robbery, against some chiefs and kingmakers.

“The said chiefs and kingmakers were arrested, arraigned in court and detained in prison custody for months before they were released on the advice of the Director of Public Prosecution, DPP, which exonerated them of the false accusation.”

Ogun govt urged to intervene
The council, however, petitioned the Ogun State Government to prevail on Oba Gbadebo to grant their request and approve the selection of Alawode as the Olu of Orile Imo.

In a petition titled: The vacant seat of Olu of Orile Imo: Denial of our right and plea to save our soul, the five ruling houses of Imo alleging plans by Oba Gbadebo to install an unpopular candidate as the next monarch of the town.

The ruling houses accused Oba Gbadebo of frustrating the council of kingmakers installing Alawode, whom they said emerged as the Oba-elect of the town, after passing through the traditional council’s screening exercise.

In the petition, the ruling houses accused Oba Gbadebo of frustrating attempts of the kingmakers at installing the new monarch because his preferred candidate failed the screening exercise conducted by the Imo Traditional Council.

They stated that apart from all necessary traditional rites; a free, fair and credible election was conducted under the leadership of the former chairman of Obafemi Owode Local Government Chairman, who is also the Odunfin of Imo, Mr. Akeem Babatunde. They, however, wondered about the delay in the approval.

Alake fires back
In his response, the royal father said he considered the process of selection of the Oba-elect to be one done in a hurry, citing various sections of the Chiefs Laws and other laid down criteria for granting of beaded crowns in Egbaland.

Alake equally said the appointment of the new Olu of Orile Imo-elect was first announced on the internet (social media), which he said, he found ‘most embarrassing’.

Worshippers, Bomode Oku Social Club of Orile Imo and Imo Central Mosque.
All the petitioners supported Mr. Reuben Sogaolu as the rightful candidate to fill the vacant stool of the Olu of Orile Imo, saying that he has contributed to the development of the community.

They claimed that Sogaolu has also contributed to the emancipation of the people of Orile Imo; both young and old.

Ruling houses insist on Alawode as king-elect
Speaking with Vanguard, three members of the town’s Regency: Chief Idowu Sowande, the Aro of Imo, Chief Odunayo Osanyintola, the Lipeki of Imo, as well as the Balogun of Imo, Chief Hamodu Dauda, declared that nothing would change the decision of the town’s kingmakers on their choice of Alawode as the king-elect.

They lamented that the absence of a traditional ruler in the community has been taking its toll on the security of the town, stressing that the police could attest to that.
They said: “We must say that as families of the ruling houses in Imo community and on behalf of all Imo indigenes, absence of an Oba is causing serious developmental delay and beyond this, it may create a room for anarchy if this matter is not given the urgent attention it deserves.”

The community, however, appealed to Governor Abiodun to intervene in the matter to unravel why Oba Gbadebo has refused to approve of the choice of the kingmakers.
They also denied reports that Oba Gbadebo is planning to install an unpopular candidate as the next monarch of the town.

The Asiwaju of Orile-Imo explained that the Ogbonis are imposing whom to choose as the next Oba, which is not under the due process of selection.

The Asiwaju of Orile-Imo said: “As a matter of fact, the purported obligation of we, the people of Orile-Imo; the chiefs, the baales and the youths, totally dissociate ourselves from the publication of the Ogbonis. How could we be attacking the constituted authority and the paramount ruler of Egbaland, Alake of Egbaland on the air? “We are his subjects. We cannot do that. We, hereby, dissociate ourselves from such publications. If anybody has any evidence that he is the kingmaker, they should bring it out. The Alake of Egbaland is the alpha and omega; it is only him that can say yes or no in Orile-Imo.”