Liverpool have been linked with a move for the Udinese midfielder Rodrigo de Paul for the second time this month.

Earlier this month, we covered a report from England linking the player with a move to Anfield and now Corriere dello Sport have picked up on those claims as well.

The Italian publication claims that the 26-year-old Argentine is a target for Jürgen Klopp.

The central midfielder has done quite well in the Italian League over the past year and he could prove to be a quality addition to the Liverpool midfield.

As per the report, a fee of more than €40m could be required to lure the midfielder away from Udinese at the end of this season. 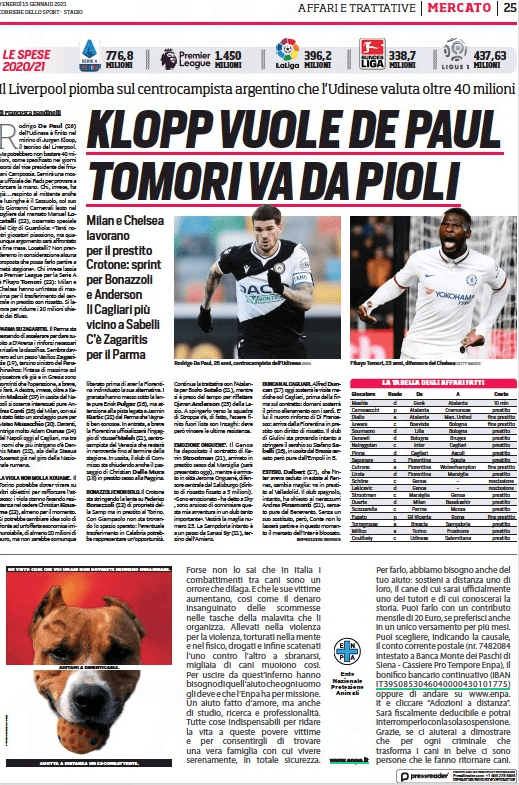 The Reds could definitely use some extra creativity in the middle of the park.

Keita has missed 35 games for Liverpool since the start of the 2018/19 season.

The Udinese midfielder could be a good alternative. De Paul is an excellent dribbler and he is quite effective with his shooting from the long-range and set pieces as well.

Meanwhile, the 26-year-old could replace Gini Wijnaldum as well, although the Dutchman has a different skill set to that of de Paul.

Wijnaldum been linked with a move away from Anfield at the end of this season once his contract with the club expires.

The 26-year-old Argentine midfielder was heavily linked with a move to Leeds United earlier this season but the Whites did not meet Udinese’s asking price.

De Paul has three goals and an assist to his name so far in Serie A and he has delivered four man of the match performances in that time.