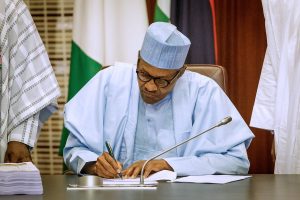 President Muhammadu Buhari has approved the appointment of Hilary Kelechi Madu, as the new Acting Commandant General of the Nigeria Security and Civil Defence Corps (NSCDC).

Naija News reports that Madu was the Deputy Commandant General of the NSCDC before Buhari’s appointment.

According to PRNigeria, Gana handed over to Madu, the most senior officer, at brief a ceremony at the Abuja headquarters.

Recall that some retired serving officers and concerned citizens had warned Buhari against an extension of tenure for heads of Nigeria’s paramilitary agencies.

According to them, retaining the officials after their tenure expiration would psychologically affect personnel development and career progression.

This newspaper understands that the warning came after alleged moves by Aregbesola to get Buhari’s approval for the continued stay of the officials.

The stakeholders wondered if there are no capable hands to take over, continue with policies, as well as inject new ideas.