Police Express Fear As Over 2,000 IDPs Arrive Yobe From Borno 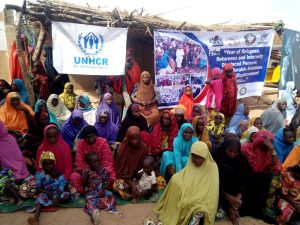 Yobe State residents have been urged to be watchful of their surroundings as over 2000 Internally Displaced Persons (IDPs) relocated to the State.

The call for caution was made by the State Police Command upon learning that the new arrivals are mostly from Gubio, Magumeri, Kaga, and Kunduga local government areas of Borno State.

Admonishing the citizens in a statement made available to newsmen on Thursday, February 4, the Command’s Public Relations Officer, ASP Dungus Abdulkarim, believed that the IDPs relocated from their ancestral homes as a result of continuous attacks by terrorist groups.

Abdulkarim noted that the IDPs must have landed in the state while in search of food items and other valuables.

He said: “In a proactive move, over two thousand (2,000) IDPs so far have been profiled by the command for security reasons, while the influx of persons into the state is yet ongoing.

“The new arrivals have so far settled in areas which include Geidam, Tarmuwa, and Gujba LGAs of Yobe State as well as Isori, Kukareta, Kasesa and Kalallawa villages around the state capital, Damaturu”, the PPRO noted.

Abdulkarim, however, said the Command is already doing its best to investigate the causes of the displacement while placing necessary strategies to ensure public safety and prevent criminal elements from taking advantage of the situation.

He again warned residents of the state “to be vigilant and report all suspicious person(s), object(s) and vehicle(s) to the nearest Police Station or formation.”