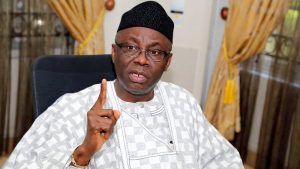 The clergy who was a running mate of President Muhammadu Buhari in the 2011 presidential election, condemned open grazing, noting that there was the need for herdsmen to register in their host communities and states for proper identification.

Speaking during a live programme on Arise TV on Thursday morning, February 4, Pastor Bakare said the open grazing system which is one of the major issues in the country at moment has become obsolete and it needs to end.

“One of the issues is open grazing. It is obsolete and it needs to end, it needs to end because the nations of the earth had gone beyond this. I was in Glasgow, I was in Israel, there are so many things that we can do about agricultural pastoralism that would stop all the troubles in our land,” the Christian leader noted.

Bakare urged the government to pass laws which must be respected by pastoralists, adding that they need to be dully registered for easy identification.

“It is a private business and it must not generate all the kinds of heat that it has generated right now,” the cleric said.

Naija News understands that states like Benue, Abia, amongst others have enacted the anti-open grazing law to check the indiscriminate activities of herders who have been accused of invading farmlands of host communities with their cattle.

Pastor Bakare further advised that actions taken to curb the crisis must be with all carefulness in other not to tear the country apart, urging men of goodwill to rise to the occasion.

He added: “There are four issues involved in this matter that I have considered and that by the grace of God as soon as I have the opportunity, I will also bring to the attention of Mr President and I know his ministers and those in government will be doing the same with him.

“One of the issues is open grazing. It is obsolete and it needs to end, it needs to end because the nations of the earth had gone beyond this. I was in Glasgow, I was in Israel, there are so many things that we can do about agricultural pastoralism that would stop all the troubles in our land.

“We’ve lived with Fulani and Fulani have lived with us across our lands, we must separate this agricultural pastoralism from the second thing – the terrorists in the forests. The government must fish out the criminals.

“We must be careful of indiscriminate violence and separate terrorists in the forests from agricultural pastoralism. Those who are invading other people’s farms must be stopped. If our laws do not stop them and if property rights are not respected, then the government is not doing what it should do.”

Meanwhile, the leader of bandits operating along Shinkafi/Sokoto Road, Zamfara State, Kachalla Turji, has stated that only reconciliation can end killings in the state.
He stated this when receiving renowned Islamic Scholar, Sheikh Dr Abubakar Mahmoud Gumi, on Tuesday.