Ooni’s Aide Reveals Why President Buhari Met With The Monarch 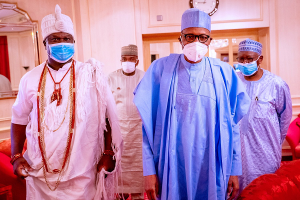 An aide of the monarch who spoke with Punch disclosed that the first-class king met with the President to discuss the rising ethnic issue in the South-West.

The aide added that the Ooni told Buhari on Wednesday the position of traditional rulers in South-West on the activities of the herdsmen.

The monarch aide who spoke on the condition of anonymity, further stated that the Ooni told the President about the damage done by some criminal herders in Yorubaland.

The Ooni during the closed-door meeting also told the president the steps traditional rulers have taken to ensure peace in the region.

The aide while reacting to the pictures that surfaced online after the meeting, he said, “Yes, they met. The meeting was supposed to have held before now but it was postponed till early next month for some reasons. They had to meet again because of the latest development in Yorubaland involving herdsmen.”

“They also discussed other important national issues. Kabiesi will give details later.”

Naija News had earlier reported that the President Buhari’s Chief of Staff, Professor Ibrahim Gambari, was also at the meeting between the duo.