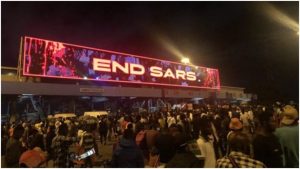 Some Nigerian youths have threatened to kick start a fresh protest over the decision of the Lagos judicial panel of inquiry investigating the alleged extrajudicial activities of the now-disbanded Special Anti-Robbery Squad (SARS) to return the Lekki tollgate to its owners (LCC).

Recall that the panel had authorized LCC to takeover the Lekki tollgate after it concluded its investigation on the spot.

This comes weeks after the controversies surrounding the clash between #EndSARS protesters and security operatives at the Lekki tollgate on October 20, 2020.

The five out of the nine-man judicial panel had on Saturday voted to returned the control of the tollgate to the Lekki Concession Company, the operators.

Four members faulted the report of the forensic experts hired to comb the scene for evidence.

The four members who rejected the forensic report are the two representatives of the civil society – Mr Ebun-Olu Adegboruwa (SAN) and Ms. Patience Udoh; as well as the two youth representatives on the panel – Rinu Oduala and Temitope Majekodunmi.

Angered by the decision, some youths have now begun to mobilize on social media with #RevolutionNow and #OccupyLekkiTollGate, with the matter trending as number one and three on Twitter.

As of 11 am, some of the youths shared Display Pictures and banners to create awareness about the protest.

Information on the posters showed that the protest is planned to start at 7 am on Saturday, February 13, 2020.

Some of the posters have inscriptions such as “No justice, no reopening”, and “Occupy Lekki tollgate” among others.

One of the campaigners, Omoyele Sowore, tweeted, “No to the reopening of #Lekkitollgate, the perpetrators of #LekkiMassacre must be brought to book.”

Dr Chuks @AhanekuChuks urged those planning to protest to strategise properly, saying, “Now we move with strategies and togetherness, it is time you showed what you have got for the government.

“We have given them much time but they took our silent night for granted not knowing that we are putting heads together to study how to bring peace to the new generation.”