Home News Nwodo: Nigeria Must Be Restructured Before 2023 Election Or Else…

Nwodo: Nigeria Must Be Restructured Before 2023 Election Or Else… 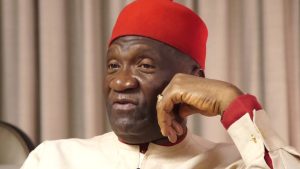 A former president-general of Ohanaeze Ndigbo, John Nwodo has said Nigeria must be restructured before the 2023 election to avoid a boycott by some section of the country.

He stated this during the 17th Gani Fawehinmi annual lecture organised by the Ikeja branch of the Nigerian Bar Association in Lagos, on Friday.

According to the former two-time minister, things worked better under the regional government system as the regions enjoyed sovereignty over their national resources while paying royalties and taxes to the federal government.

Nwodo said: “There was only one reason why things worked so well then. We had a regional system of government that allowed regions to enjoy sovereignty over their resources whilst paying royalties and taxes to the federal government. Our domestic security was independent and uncontrolled by the federal government,” he said.

“Suddenly, the army came to power and abrogated our constitution, turned us into a unitary state and imposed a unitary constitution on us. They seized our natural resources and donated them to the federal government to share without adequate respect for derivation.

“Nigeria must restructure and give its component units sovereignty over its natural resources provided they pay royalty or some form of taxes to the federal government to maintain federal responsibilities like external defence, foreign missions, customs and immigration.

“Emphasis must return to agriculture and education. Domestic security must remain in the hands of the federating units because living safe in Nigeria today is by luck. The secularity of the Nigerian state must be respected. These irreducible minimum conditions are not negotiable. If it does not happen, we will have no alternative but to go our separate ways.

“Processes to begin our restructuring as a nation must be concluded before the 2023 elections so as to avert a situation where sections of the country may boycott the elections and present the country with a constitutional force majeure.”