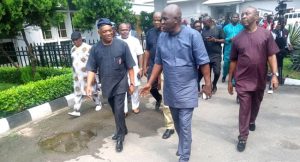 The Economic and Financial Crimes Commission (EFCC) will on Tuesday, February 2, 2021, re-arraign former governor of Abia State, Senator Orji Uzor Kalu, before a federal high court in Abuja on charges of alleged fraud.

Naija News reports that Justice Inyang Ekwo will hear the case against the former governor.

Recall that a seven-man panel of the Justices of the Supreme court had nullified judgment delivered by Justice Mohammed Idris of the Federal high court, Lagos which sentenced Ude Udeogu and Senator Oriji Uzor Kalu to 10 and 12 years imprisonment respectively.

According to the report, Justice Eko declared that Justice Mohammed Idris, who convicted Mr. Kalu, was already a justice of the Court of Appeal when he ruled and sentenced Mr Kalu and his co-defendant.

The supreme court nullified the trial on the grounds that Mohammed Idris, the trial judge, had no jurisdiction to hear the matter after he was elevated to the court of appeal.

The apex court ordered that the case be issued to another judge for a fresh trial.

Kalu got released a month after Udeogu.