Luka Jović was hot property after the 2018/19 season when he had scored 27 times in 46 games for Eintracht Frankfurt, including 10 in 14 Europa League outings as his side reached the semi-finals.

With many top clubs including the likes of Liverpool and Barcelona showing an interest in the striker at some point, it was almost certain that he was going to leave Germany in the summer of 2019.

He did just that by signing for Real Madrid for a reported €60 million on a six-year-contract, with the plan being that he would compete with Karim Benzema for a starting spot. That plan clearly did not work.

Fast forward a-year-and-a-half, and now Jović has returned to Frankfurt on a loan till the end of the season after absolutely flopping in Spain. A number of things went wrong for him, and many were of his own doing.

Jović joined Madrid on June 4, 2019. Despite sustaining a slight injury in late July, he returned to fitness in time to make a substitute appearance in his side’s first match of the season against Celta Vigo. A couple of games later, he finally made his first start for the club but was brought off after 68 minutes.

After spending 106 minutes on the pitch in Los Blancos‘ first five La Liga matches, Jović finally completed a full 90 minutes against Osasuna. It took the Serbian striker an even greater time to find the back of the net in the white of Madrid, but he finally did so against Leganés on matchday 11.

Hip problems saw Jović sit out a almost all of November, and when he finally returned in mid-December, his goal-drought resumed. The ex-Benfica man started just one match until the Supercopa de España in January, when he featured in both the semi-final and final, bringing up his first Madrid assist in the process and lifting the trophy after penalties.

Jović’s best spell (at least in terms of output) came thereafter, as he appeared in four of his side’s six matches, getting a goal and assist (which is half his all-time return for the club). Perhaps this was the platform he needed to properly launch his Madrid career.

COVID and other crises

That was not to be, though, as Jović’s already-torrid time in Madrid went in a downward spiral.

After scoring that much-awaited second La Liga goal, the Serbian striker spent only six minutes on a Spanish football pitch and was outright excluded from matchday squads on a couple of occasions too, with Zinedine Zidane stating that he had taken those decisions on sporting grounds only – Jović had to step up and deliver. He himself publically admitted that he himself was bewildered by his own performances. 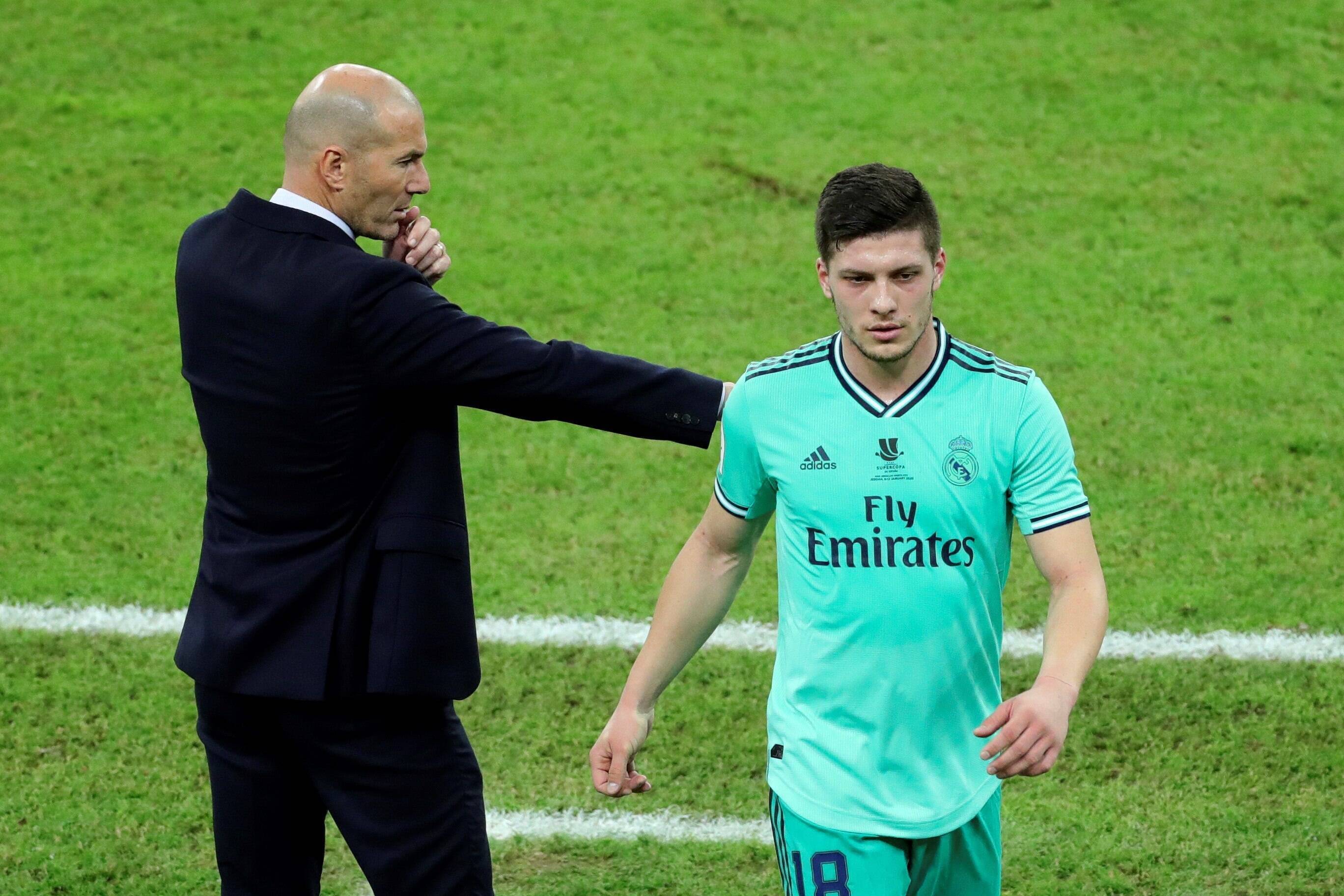 He didn’t have an opportunity to turn things around, though, as footballing activities were suspended all over the world in light of the COVID-19 pandemic. Perhaps, with some time off, Jović could recompose himself and return in the form that he was in during his Frankfurt days.

Once again, that’s not how things proceeded.

Jović immediately travelled to his native Serbia, the second-most-affected country in Europe at the time, which obviously was in lockdown. He was expected to observe a mandatory 28-day quarantine once in the Balkan country, but he was spotted outside within a week.

Getting photographed on the streets of Belgrade was bad enough, but things went further downhill for the Serbian when his own Prime Minister, Ana Brnabić said this: “We have the negative example of our football stars who earn millions and have ignored the obligation to self-isolate so they can return home.”

Worse yet, he managed to break his heel while training at home, meaning that he missed the first five matches after La Liga’s restart. When he eventually returned to Spain, crucially tested negative and made a single appearance, one of his friends, who was a part of his entourage, tested positive for COVID-19, and the club decided to place him in self-isolation although he himself was negative.

Jović did start Madrid’s last match of the La Liga season, but it was a complete disaster for him overall as he got just four starts in 13 appearances, 422 minutes of action and only two goals from 14 shots.

As the 2020 summer transfer window opened, there were many reports that Jović wanted to leave Madrid, with the manager and boardroom in agreement on that matter. The issue was finding a suitor for him and, in the end, he stayed put.

There was no question that the 2020/21 season would be his last chance with Madrid, so he would have to sort everything out and deliver. Encouragingly, Jović started two of his side’s first four league matches, but blanked in both and only made one more appearance in all competitions until November after that.

The writing was already starting to appear very evidently on the wall, but then even more disaster struck. He tested positive for COVID-19 on November 20 and then tore his abductor muscle immediately after completing his period of self-isolation.

That was the last straw, as Jović hasn’t made a single Los Blancos appearance since, and he’s in Germany now. His stats for the 2020/21 season are even worse than the previous ones – three starts, two substitute outings, 208 minutes, eight shots, zero goals.

If there’s one statistic that sums up Jović’s time in Madrid, it is that he has been made to observe one period of self-isolation for every goal he has scored for Real. His true talents have very much been quarantined throughout his time in Spain.

For his sake, everyone will be hoping that Luka Jović finds his form in Frankfurt once again, but his time in Madrid is all but over. Unless he lights the world on fire in the Bundesliga, it is hard to imagine him returning to the Spanish champions, who must be ruing their absolute waste of 60 million Euros.

Jović will need to quickly put all of this behind him in Germany, because there he will directly be competing with André Silva for the spot at the top of Frankfurt’s attack, with the Portuguese striker in fine form having netted 11 times already in this season’s Bundesliga.

The next six months will be very important for Jović, whose status as a half-relevant figure in the elite footballing circles is under severe threat. Can he distinguish himself once again, or has his talent dried up?