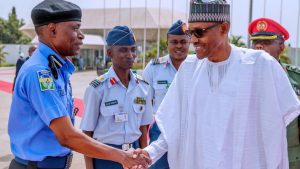 An Abuja-based lawyer, Maxwell Okpara, has asked the Federal Court sitting in the federal capital territory (FCT) to stop Mohammed Adamu from parading himself as the inspector-general of police (IGP).

Naija News reports that Adamu who attained the mandatory 35 years of service was supposed to have stepped down on Monday.

But this online newspaper reported that Adamu was at the Nnamdi Azikiwe Airport on Tuesday to receive President Buhari who returned to Abuja after a four-day trip to his hometown Daura, Katsina State.

He listed Adamu, Buhari, The attorney-general of the federation (AGF), Abubakar Malami and the police council as defendants in the suit.

“Whether the failure of the president and the Nigeria Police Council to appoint an IG on February 1, 2021 does not constitute an abdication of their duties under Section 215 of the Constitution and Section 7 of the Nigeria Police Act, 2020.”

He asked for an order restraining Adamu from “parading himself as IG or exercising any form of command or control over the Nigeria Police Force not being a serving police officer”.

He also prayed for another order mandating Buhari and the police council to immediately appoint a new IGP in line with the provisions of section 7 of the Police Act.