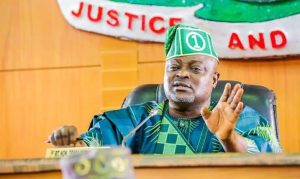 Lagos State House of Assembly in the leadership of Mudashiru Ajayi Obasa, the house speaker, has passed a bill to punish parents of convicted cultists in the state.

Naija News understands that the ‘Unlawful Societies and Cultism (Prohibition) Bill 2020’ was forwarded to Governor Babajide Sanwo-Olu on Monday, February 1 for his consent.

However, the punishment to be given to parents of the convicted cultists was not revealed at the plenary.

Speaking on the development, Obasa said the government forbids unlawful societies and cultism in Lagos.

In another news earlier, Naija News reports that one Suleman Adekola has been found lifeless a the football field around Abaranje, in Ikotun area of Lagos State.

Reports had it that the deceased drove his tricycle to the centre of the football pitch and consumed a portion of a local insecticide to kill himself over unknown cause. Passersby and residents who noticed Adekola’s body lifeless reportedly raised an alarm by informing authorities.