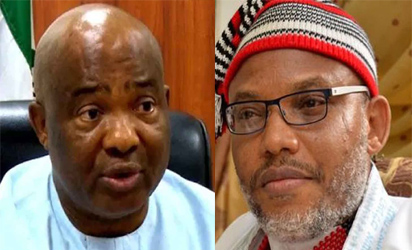 Less than one month after Owerri Correctional Centre and headquarters of Imo State Police Command were attacked, the country home of Governor Hope Uzodinma was bombed yesterday.

The incident, which happened at 8:15 am at his village, Omuma, in Oru East Local Government Area, resulted in the death of four security operatives.

Same day, the Commander of Eastern Security Network (ESN), an outfit facilitated by the Indigenous People of Biafra (IPoB), and six members of the outfit were killed during a shootout with security forces in the state.

The separatist group said the governor had stirred the hornet nest and would pay dearly for it.

The state government said the attack on Uzodinma’s country home was carried out by 15 people, who arrived at the scene in three vehicles including a tipper loaded with used tyres.

”Yes, I can confirm the story. The hoodlums attacked the governor’s house by throwing in petrol bomb as a result of which two cars were burnt, but they were successfully repelled.

“None of the building was set ablaze. However, one unarmed personnel of the NSCDC was killed in the process. The hoodlums while escaping also killed a Police Sergeant and another NSCDC personnel both in their private vehicles at Mgbidi junction,” the Police spokesman said.

Meanwhile, Sunday Vanguard learnt that an officer of the Imo State Fire Service was also killed by the attackers.

A source in Omuma community told Sunday Vanguard: “The man was killed as they were driving to Governor Hope Uzodimma ‘s house to quench the fire.

He was killed less than two poles away from Uzodinma’s house.”

The dead security operative was said to be a father of five children.

It was further gathered that the attackers also carried out pockets of attacks in another Local Government Area.

A resident of Omuma community, who spoke on condition of anonymity, said: “The attacks in other areas were not serious. They were shooting to clear the way for themselves. As a result of the shooting, some people running away got injured. I was told some were struck by stray bullets. The areas the hoodlums were shooting sporadically as they were leaving were in Orlu, parts of Oru East and Oguta Local Government Areas.”

In his reaction to the incident, Imo State Commissioner for Information, Declan Emelumba, said: “Gallant security operatives this morning repelled an attack on the Omuma country home of the governor of Imo State, Sen Hope Uzodimma.

“At about 9 am today, Saturday, April 24, a group of hoodlums, numbering about 15 and driving in a motorcade of three vehicles accompanied by a tipper loaded with used tyres, stormed the country home of the governor in Omuma, Oru East LGA and attempted to burn down the house.

“However, vigilant security operatives attached to the governor’s house successfully repelled the attack and consequently minimised the damage they had planned to unleash. In the crossfire that ensued a few casualties were recorded. Preliminary investigation suggests that the foiled attack may have been politically sponsored.

“Government has directed relevant security agencies to expedite investigation on the incident and promptly apprehend the sponsors and their agents and bring them to justice.”

Also speaking on the issue, the Coalition of South-East Leaders, led by Mr. Goodluck Ibem, said the attack was perpetrated by aggrieved politicians.

“The Coalition of South East Youth Leaders, COSEYL, the apex socio-political youth organisation in the South-East geopolitical zone condemns in strongest terms the vicious invasion and incursion by men of the underworld that led to the untimely death of security operatives guarding the governor’s house in his country home at Omuma in Oru East Local Government Area of Imo State. The burning of the governor’s house and killing of security men on duty is wicked and barbaric”, the group said in a statement.

“Igboland is a peaceful place and anyone behind this vicious attack on Igbo land must be brought to justice.

“The attack on the governor’s residence is purely the handiwork of aggrieved politicians who are not happy with the governor’s stance against corruption and conversion of government properties to personal properties.”

Meanwhile, the Commander of Indigenous People of Biafra, IPoB/Eastern Security Network (ESN), in the South-East, identified simply as Ikonso Commander and six other IPoB/ESN members were killed in a shootout with men of the Police, Army and the Department of State Service, DSS, in the state.

Three policemen and a soldier were said to have sustained bullet injuries during the incident.