Herdsmen: Why Tinubu Is Afraid Of Buhari – Afenifere Chieftain, Adebanjo 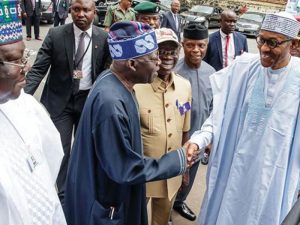 A leader of the Yoruba socio-political group, Afenifere, Chief Ayo Adebanjo, has revealed why the National Leader of the All Progressives Congress (APC), Bola Tinubu, refused to speak on the Fulani herdsmen crisis.

Speaking on Wednesday to The Punch, Ayo Adebanjo accused Tinubu of not wanting to offend President Buhari.

He stated that Tinubu believes Buhari will help his presidential ambition in 2023, hence his silence over the herdsmen crisis in the southwest.

According to Adebanjo, “Everybody knows who Tinubu is. Don’t bring me to that controversy. Tinubu does not represent us. All that is happening in Oyo now, what has he said? When they (gunmen) killed the Oba in Ekiti, what did he say?

“He didn’t say anything that will oppose Buhari because he is thinking Buhari will make him the president. So, he doesn’t want to say anything to offend him. Amongst all the governors he (Tinubu) sponsored, (Rotimi) Akeredolu has the courage to speak up.”

Speaking on the quit notice to herdsmen by Yoruba activist, Sunday Adeyemi, popularly known as Sunday Igbohoi, the Afenifere chieftain said the activist acted within constitutional provisions of self-help.

“What he did is constitutional –self-help. Igboho arose as a result of the negligence of the constituted authorities to protect the people. If the Federal Government had arrested the Fulani herdsmen, Igboho won’t rise up,” he said.

He said, “I don’t buy the propaganda of the defence of the Federal Government that how do you know they are Fulani? That is escapist statement.

“For the past five years, we have been talking about the same thing. And when they are caught, they will say, they are not local Fulani. And you can’t explain how these foreign Fulani came to attack your people. You see the absolute negligence, dereliction of duty and incompetence in protecting lives and property as commander-in-chief?”