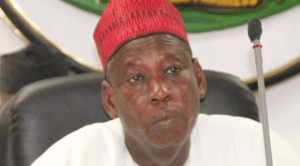 Naija News reports that the former Military Administrator (MILAD) of Kano State died at the age of 65 in Abuja on Sunday, January 10 after a brief illness.

Joining the hosts of others to express their grief, Governor Ganduje in a statement issued on Monday in Kano through his Chief Press Secretary, Mr Abba Anwar described the former MILAD as an “astute, sound and a gallant military officer“.

He added: “Kontagora’s high level of discipline and unassuming pedigree earned him many accolades during his military days, particularly when he was Kano State Military Administrator.

“It’s indeed a great loss not only to his families, Niger State Government or the military as an institution, it is equally a great loss to Nigeria and Nigerians”.

The governor prayed Allah to forgive all his wrongdoings and reward all his good deeds with Jannatul-Fiddaus.

Meanwhile, a family source had confirmed to newsmen earlier that the deceased was buried today, Monday, January 11, in line with the Islamic rites.

In another news, the Christian Association of Nigeria (CAN) has faulted the alarm raised by the Department of State Security (DSS) about a plot to cause religious crises in some parts of the country.