Home News Fulani Eviction: ‘Akeredolu Is An Illiterate Who Is No Fit For A Leader’ -Galadima

Fulani Eviction: ‘Akeredolu Is An Illiterate Who Is No Fit For A Leader’ -Galadima 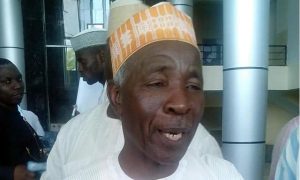 The former ally of President Muhammadu Buhari while speaking on Wednesday, February 3 on AIT Kaakaki, described the governor as an educated illiterate for sending out Fulani herdsmen out of ‘government-owned land’.

Barely three weeks ago, Naija News reports that the Ondo State Governor ordered herdsmen in the state to vacate the forest reserves within a period of seven days counting from Monday, 18th January.

Reacting to the order of eviction which has generated a barrage of comments from concern stakeholders across the states, Galadima faulted Akeredolu, said he wondered that Akeredolu who is a lawyer and a Senior Advocate of Nigeria (SAN) could give such an order.

He said the governor should know better that there was no law that permits him to evict Fulani herders for any reason, adding that anybody can choose to live anywhere in Nigeria.

According to him, the argued forest reserves belonged to the Federal Government, adding that Akeredolu displayed an act of ignorance for him to have given herders in the state eviction notice.

He said, “Governor Akeredolu of Ondo State who calls himself a SAN is an educated illiterate. He shouldn’t be giving such orders in the first place. All Nigerians are free to live in any part of Nigeria.

“It should be that any group of people living in any part of the country should be protected at all costs irrespective of their tribe, ethnicity or religion.

“So also, the Fulani or any other tribe, be it in Ondo, they are under the protection of the Federal Republic of Nigeria.

When questioned about what the Land Use Act 1976 says, Galadima said: “lands are vested in governors of various States to hold in trust for the people. And in Ondo, they are part of the people that the Act says the governor should hold the land in trust for.

“You see, there are certain things you do; you play the law; you play morality, and you play unity. On this issue, Ondo State governor is supposed to play unity and it’s wrong to declare a certain ethnic group ‘persona non-grata’ in a certain area of your State.

He challenged Akeredolu to engage him in media discussion on his reasons behind the eviction order he served on Fulani herders in Ondo forests. He reiterated that the governor displayed lack of leadership acumen, stating that he now understood better why there was so much acrimony even from the people in Ondo, when Akeredolu was running for a second term in office.

Galadima added: “He has manifested himself so well that he is not a leader.”

He suggested that if the people living in Ondo forest are a security threat, they should be raided and neutralized rather than being evicted.

“If what he meant was to have the Fulanis registered for easy identification which he later claimed, how would they be registered in their own country? I am not a Fulani and I am not talking for them. This kind of things should not happen.

“Of course, it is legitimate for government to try to identify the actual people who are carrying out heinous crimes, particularly in the obvious infiltration of foreigners, but not to evict.

“There is a difference between identification and eviction. What I said is that it is not right to evict anybody.

Meanwhile, in a subsequent report, Governor Akeredolu said Fulani herders responsible for series if criminal activities in the state forest reserves are not Nigerians.

The governor alleged during a courtesy visit to his office by Dora Amahian, the Zonal Coordinator, Zone ‘F’ of the Nigeria Immigration Service, that the state forest reserve has been occupied by foreign herders who float in without identification, Naija News reports.