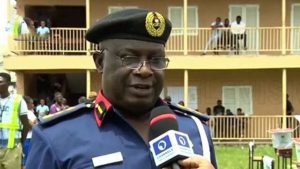 Madu has taken over from the former Commandant General, Abdullahi Gana, whose extended tenure of six months expired on Monday, January 18.

Gana following the end of his tenure handed over to Madu as the most senior officer, but some people were not pleased with the development.

Following the development, some individuals mounted pressure on the presidency, claiming Gana was not due for retirement.

However, uncertainty about NSCDC is now finally over with the corps spokesperson, DCC Emmanuel Okeh, confirming Madu’s appointment as the Acting CG.

Okeh in a statement said Madu thanked the federal government and the Interior Minister, Rauf Aregbesola for the opportunity to lead the corps.

Madu promised to continue in the execution of the agency’s mandate to justify the confidence reposed in him.

He assured of his determination “to rejig the system and personnel in order to ensure effective service delivery especially in Agro Rangers operations and the Protection of Critical and National Assets.”