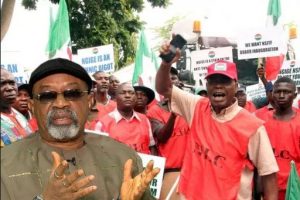 The Federal Government has rejected the indefinite strike embarked upon by members of the Non-Academic Staff Union of universities, the Senior Staff Association of Nigeria Universities and the National Association of Academic Technologists.

Recall that unions had in a letter to its chapters directed them to embark on the indefinite strike on Friday.

The directive was issued in a statement signed by the leaders of both university staff associations on Thursday.

Part of the notice read, “In view of the outcome of the meeting, the leadership of JAC of NASU and SSANU at the branches are hereby directed to commence joint general meetings on Friday to give reports on the outcome of the conciliation meeting and pass resolutions on the way forward.

“In the meantime, the nationwide strike takes effect from 12 midnight, Friday, February 5, 2021, pending any contrary resolution by the branches.”

But reacting while speaking to State House correspondents after meeting with President Muhammadu Buhari, the Minister of Labour and Employment, Chris Ngige, stated that the union cannot go ahead with their planned industrial action.

He said going ahead with the planned strike would run contrary to the International Labour Organisation’s statute on social dialogue and principles at work.

The minister said that the government has moved to “apprehend the strike” because the country just came out from a strike by the Academic Staff Union of Universities which lasted nine months.

Ngige explained, “In consonance with the labour laws, we have apprehended both strikes. They gave us trade dispute notice, we scheduled meetings with them after apprehension, we held meeting with NASU and SSANU last week Tuesday and government’s position was explained to them.

“They have a lot of issues mentioned as their grouse, issues like IPPIS. They said IPPIS has amputated some of their allowances, they also have the issue of consequential adjustment that was paid to all civil servants as a result of the new minimum wage of N30,000 for staff above Grade Level One, that is starting from Grade Level Two up to Level 17.”

“So, in the main, after conferring with Mr President, we are telling the unions not to carry out the action because that action will run counter to ILO Statute on social dialogue and principles at work because their employers have listened, they have brought them to the table.

“So, for SSANU and NASU, we are imploring them not to carry out their threat which they said will take effect from this midnight.

“More so, when the meeting adjourned at their own instance. Just this morning, I received a letter from them giving us a new date for the continuation of the dialogue.

“They proposed a new date of Thursday, February 11 and my office has communicated to them back that we will be ready for them at that time because as they claimed, they needed time to consult with their constituency and come back on the fresh issues that have cropped up from the discussion.”

The varsity workers are going on strike to press home their demands, bordering on alleged injustice on sharing formula of N40bn Earned Allowance and non-payment minimum wage arrears.

Other contentious issues raised include: inconsistencies in the implementation of the Integrated Payroll and Personnel Information System (IPPIS), delay in renegotiation of FG/NASU and SSANU 2009 agreement, non-payment of retirement benefits of outgone members among others.