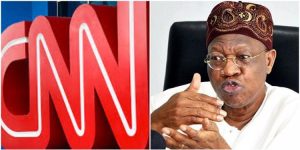 Nigeria’s Minister of Information, Alhaji Lai Mohammed has accused CNN and Amnesty International (AI) of double standards on their position on the #EndSARS protests in Nigeria and the Capitol Building invasion in the USA.

Mohammed said what happened during the Capitol invasion in the USA is similar to the Lekki Toll Gate incident during the #EndSARS protest in Nigeria but the two organizations chose to treat the American version differently.

He blamed CNN for relying on concocted social media lies to blame the federal government for the Lekki Tollgate incident with security operatives, insisting the incident is part of why the government is insisting on regulating social media.

The Minister in his interview with Thisday, alleged that while CNN reported the October 20 Lekki incident as an attack on peaceful protesters, it labelled the perpetrators of the January 6 Capitol invasion in the USA as “insurrectionists.”

He, therefore, submitted that both CNN and Amnesty are not objective in their reportage and don’t have the interest of Nigeria at heart.

He said: “But when we said we must regulate the social media, the world took up arms against us. How come that the same CNN that invented lies against us is suddenly championing the crusade in America that social media must not be used for fake news and disinformation?”

He added that if the organization has any evidence of what happened at the Lekki Toll Gate, it should be presented to the judicial panel of inquiry rather than use social media to stir the people against the government.

“Give the names and addresses. Three months or 100 days after the Lekki shooting, if anybody has lost a relation, a son, a daughter or a ward, won’t she or he have come forward? Amnesty International is not a respecter of our judicial system. What it ought to do, if there is any judicial evidence, is to go before the judicial panel of enquiry or at least wait for the outcome of the judicial enquiry.

“Amnesty International is reproving the federal government, but as we speak, the American government is arresting and prosecuting every person that took part in the invasion of the Capitol Hill. They are also investigating the source of funding of those people. When Nigeria started it they went to court, forgetting that it is because Nigeria exists as a country that we are here. When one policeman was killed at the Capitol, it was an insurrection. If not because we were proactive, they were coming to the National Assembly and CNN did not see anything wrong in that. Amnesty is guilty of double standards. When the US refused a visa to ICC investigators, Amnesty did not find its voice. It should respect us as a sovereign nation and should stop vending lies, disinformation. Their purpose we don’t know, but this is very clear when it is Nigeria they find their voices when it is America, they keep mute,” the minister added.

The CNPP submitted that the two top government officials have become images of falsehood in the minds of Nigerians.

The CNPP statement signed by its Secretary-General, Chief Willy Ezugwu on Sunday said the Buhari administration will regain some credibility if it sacks the two officials for always lying to Nigerians and the international community.