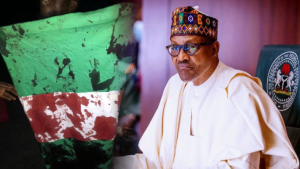 Amnesty International has accused the Nigerian government of cover-ups on Lekki Toll Gate massacre that claimed the lives of many citizens in the last year.

Naija News recalls that there was uproar a few months ago after men of the Nigerian Army and Police allegedly fired live ammunition on citizens protesting against police brutality in Lagos State.

The Nationwide protest tagged #EndSARS was a call for an end to a unit of the Nigeria Police Force known as the Special Anti-Robbery Squad (SARS). However, the supposed peaceful protest turned bloody after guns were shot at protesters at Lekki toll gate and Alausa in Lagos State in October 2020, Naija News recalls.

After many days of controversies and investigations, Amnesty Internation in a statement made available to newsmen a few hours ago accused the Nigerian government of covering up those responsible for the shootings of #EndSARS protesters.

It could be recalled that the incident which happened a hundred days ago resulted in the deaths of many protesters. AI’s Director in Nigeria, Osai Ojigho, in the statement, demanded justice for victims of the shootings.

Though the government had denied mass killings during the incidents, Amnesty insisted that 12 persons were killed.

AI’s statement in reaction to the unforgettable event reads: “Nigerian authorities have failed to bring to justice those suspected to be responsible for the brutal crackdown by security forces on peaceful #EndSARS protesters at Lekki toll gate and Alausa in Lagos in October 2020 and have brazenly attempted to cover up the violence, said Amnesty International Nigeria today, 100 days on from the attack.

“Since the assault by security forces, which killed at least 12 people, Nigerian authorities have targeted supporters of the protests against police brutality by the disbanded Special Anti-Robbery Squad. Some of the movement’s supporters have had their bank accounts frozen.

“The bloody events of 20 October 2020, when Nigerian security forces killed at least 12 people during the violent dispersal of peaceful #EndSARS protesters at Lekki and Alausa, have cast a shadow over Nigerian society that lingers to this day.

“Instead of bringing suspected perpetrators to justice and prioritizing genuine police reforms, Nigerian authorities have been abusing their powers by subjecting those who supported the protests to intimidation, harassment, and smear campaigns.

“Those suspected to be responsible for the killings should be brought to justice in accordance with international fair trial standards.”

Naija News, however, recalls also that after several denials, the Nigerian Army acknowledged that Lagos State Governor Babajide Sanwo-Olu had requested them to deploy force men to the venues of the protests.

A representative of the army, Ahmed Taiwo, also confirmed to the Lagos State Judicial Panel of Inquiry and Restitution investigating cases of police brutality in the state that soldiers attacked the protesters with blank bullets and live (bullets).