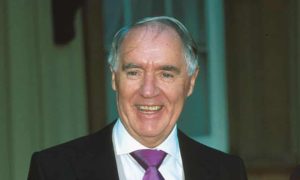 Naija News understands that the Daily Telegraph newspaper owner whose net worth is estimated to GB£7billion died on Wednesday, January 13, 2021, at the age of 86.

Daily Telegraph reported that Barclay died after a short illness.

This online news platform understands that Barclay and his identical twin, Frederick, had been in business together for years before his demise.

“The Barclay brothers operated as one throughout their active business career while doing their utmost to avoid personal publicity and discourage media scrutiny,” the broadsheet revealed.

Meanwhile, the Minister of Finance, Zainab Ahmed, has warned that the federal government may impose a fresh nationwide lockdown to curb the spread of COVID-19.

Naija News reports that the Minister stated this while speaking during the 2021 budget breakdown in Abuja on Tuesday.