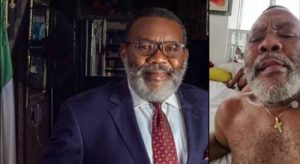 A police source has confirmed that the sex video where an appointee of President Muhammadu Buhari, Willie Amadi, was spotted in a room with two girls making out was not doctored, according to SaharaReporters.

The Federal Commissioner, Imo State Office of the Public Complaints Commission, was spotted in the viral video with two girls in a compromising position.

An Imo State Magistrates’ Court a few days after the incident, convicted a 20-year-old school leaver, Peter Nwoke, for superimposing a picture of Amadi into the video to blackmail the presidential appointee.

The Prosecutor, Okereke Chikodi while narrating suit number MCI/2C/2021 filed before Magistrate C. P. Nnoromele, said soon after getting a formal complaint from Amadi, the Commissioner of Police set up a team of detectives to go after those behind the alleged crime.

Chikodi further stated that after an investigation by detectives, Nwoke was arrested and he freely made a confessional statement to the police.

“I asked him (Amadi) to come to Umuogbor Isuobishi, Isunjaba in Isu Local Government Area to collect the phone and he came, collected it and gave me N40,000,” Nwoke was quoted to have said in his confessional statement.

“Before then, I had transferred some information from his phone to mine, which included pictures he took in a swimming pool. When he left, greed and the devil came into me (tool control of me). I thought I should make more money from him. Seeing his car and realising that he is a big man, I decided to superimpose one of his pictures on a sex background to force him to negotiate a settlement with me.”

“When I called him several times, and he did not pick up my calls, I became angry and decided to send the pictures out through the internet. Three days after, I was at a joint with some people when the police arrested me. I confessed to the act at the police station because I did not know that what I did would bring such a big problem to me.”

“I begged him to forgive me and promised not to do such a thing again.”

However, a source who spoke with the news platform noted that Nwoke made the confession after he was threatened and promised millions of naira.

“The narrative that one Nwoke Peter edited a sex video to blackmail Amadi is false. It was well planned by Amadi and some top police officers. I was reliable informed that they promised the young boy millions of naira to cooperate with them; this was after they threatened the young man several times.”

“I can’t say the exact amount that was paid now but I was told he has been paid part of it. He (Amadi) claimed it was a video from a pool side that the boy edited; tell him to show us this original video, I mean the video he claimed he took beside the pool which the guy superimposed on another.”

“As I said earlier, it was all planned to save Amadi from losing his current job as an appointee of President Buhari and his future political ambition. Imagine, this guy was arrested, investigated and sentenced to prison within nine days, not even a month, my brother, nine days. What kind of investigation was done without a forensic analysis? I pity the young boy though, he did everything under duress,” a senior police officer told SaharaReporters.

Speaking to SaharaReporters, a Lagos-based forensic expert, Gbenro Akinyomi, said an analysis of the video using an InVID software showed it was not superimposed.

“Check the video very well, there is a mirror behind the scene reflecting the true activities. The man (Amadi) recorded the video; he was involved in the act. Since he claimed it was superimposed, what about his image on the mirror in the background? Was that edited as well? The video is real,” he told SaharaReporters.

A Nollywood actress, Hilda Dokubo, who reacted to the development called for an investigation into the case, she noted that Nwoke might have been forced to own up to a crime.

The actress noted that the accused could not have committed the crime because there is no technology at the moment that one can use to superimpose a photo on a video or motion picture.

Dokubo in a video posted on Facebook said from her experience in the movie industry since 1992, it is impossible to superimpose a photo on a video or motion picture.

She went on to say that assuming it was possible, a green screen is needed and that Amadi would need to be with that green screen which in that case would make him part of the conspiracy.

“What kind of compensation and or threat made a 20-year-old jeopardise his future bagging a 12-month prison sentence by confessing to an obvious lie? The mirror holds the truth. The technology to perform this level of seamless superimposing of a still picture on a motion picture does not exist! And the knowledge and manpower required to do it? Will need more than the Black Panther team,” she said.