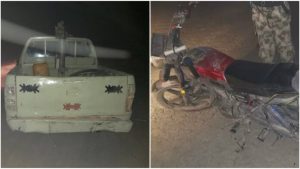 The troops who overpowered the terrorist group on Thursday even with firepower recovered gun truck during the attack in Borno State.

Military sources which spoke with PRNigeria noted that the terrorist attempted to access the town from different locations but was hindered by troops.

The clash between the terrorist group and military officers led to the death of some terrorist, while gun truck, motorcycles among other weapons were recovered by the troops.

The Nigerian troops operating under the auspices of Operation Tura Ta Kai Bango have been up and doing the searching for terrorist hideouts.

In a related development, bombs detonated by Boko Haram insurgents have resulted in the deaths of some Nigerian soldiers and many terrorists, Naija News understands.