Biden Calls Nigerian Family Who Contributed To His Victory (Video) 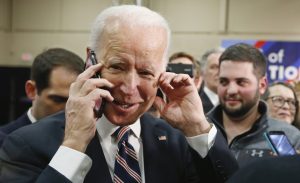 US President Joe Biden on Wednesday called a Nigerian family for contributing to his victory in the 2020 presidential election.

Biden also appreciated the first daughter named Josephine for campaigning for him and all Democrats during the election. The US leader gave them an invitation to visit him in the White House in due time.

US President, Joe Biden Calls Josephine, A Nigerian Girl & Her Father Who Contributed To His Victory, He also gave them an invitation to visit him in due time.

Biden was sworn-in on Wednesday, 20th January as the 46th President of the United States of America by the US Chief Justice.

Earlier, Kamara Harris had also been sworn in on the same day as the Vice President, becoming the first African-American woman to occupy the position.

Speaking after the swearing-in, President Biden said: “My whole soul is in this: bringing America together…and I ask every American to join me in this cause.”

Biden defeated Donald Trump in the 2020 American presidential election to emerge the new president of the United States.

Trump who refused to attend the inauguration of his successor had earlier left the white house.

The Presidential Marine One helicopter carrying Donald and Melania Trump took off shortly after 2:15 p.m. from the gardens of the White House.

Speaking just a few words, the outgone president referred to a “fantastic four-year” term, “It’s been a great honour, the honour of a lifetime,” Trump said.