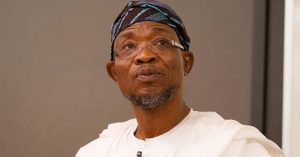 The Minister of Interior, Rauf Aregbesola, says no life was lost in the fire incident that took place at the Nigeria Immigration Service (NIS) on Sunday.

He made this known in a statement by Muhammed Mangal, Director, Press and Public Relations of the Ministry on Monday, 11 January 2021.

According to the minister, no injuries were also recorded in the fire incident, adding that the cause of the fire is being investigated.

He, however, noted that the fire affected the data management centre, especially the Migration Information and Data Analysis System (MIDAS) of the service.

The statement reads: “It (the fire) affected the data management centre, especially the Migration Information and Data Analysis System (MIDAS) which enabled the agency to coordinate movement of persons at the borders and upload information on missing and stolen passports to INTERPOL database.

“However, no data was lost as a result of the incident and this will not affect the operation of the agency whatsoever since each border post is also independently connected to INTERPOL.

“This incident occurred at a time the data management centre is being transferred to a new ultramodern building. The migration will now be accelerated seamlessly.”

“NIS has in place an effective protection and security system for its data and operations facilities and will continue to offer quality services to Nigerians and foreigners alike in all areas of its mandate,” the statement added.