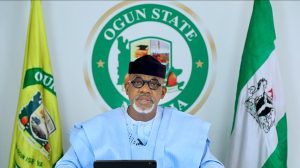 Governor Dapo Abiodun of Ogun State has ordered investigations into the recent clash between herdsmen and farmers in Eggua, Yewa-North Council Area of the state.

The governor made this known in a statement on Saturday in Abeokuta, signed by his Chief Press Secretary, Kunle Somorin.

According to the statement, Abiodun had also set up a special task force to maintain peace in all areas prone to herders/farmers conflict in the state.

The governor condemned the clash that led to the loss of one life and the destruction of property and ordered the perpetrators be brought to justice.

Abiodun, however, commiserated with the family of the deceased and also expressed sympathy to those who lost their farmlands and cows during the clash.

The statement reads: “Our first priority in Ogun is the safety of lives and property of everyone and we will not compromise on that.

“We will not condone any act of criminality in the state, no matter who is involved.

“The Police and other security agencies have been directed to go after the perpetrators of this act and bring them to book.

“We will not allow anybody to disrupt the peace in Ogun and anyone who tries to test our resolve to maintain peace in our state will have himself or herself to blame.

“Our state is known for being a haven of peace, security and harmonious relationship amongst people of different ethnic groups whether citizens or settlers, who consider the state their home.

“This is a long and cherished tradition that we are proud of and which this administration is committed to sustaining.

“We, therefore, condemn in strong terms the recent unfortunate violence orchestrated by certain elements to set an agenda that is inimical to public security and safety.“