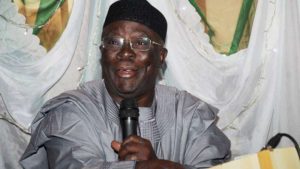 A chieftain of Afenifere, Chief Ayo Adebanjo, on Wednesday said, the presidential election in 2023 is not feasible until there is a change in the constitution of the Federal Republic of Nigeria.

Adebanjo when asked on the criteria for Afenifere to back a presidential candidate said, “I don’t see the practicability of an election in 2023 without a change of the constitution with all the inequities and iniquities in it.”

He stated this while speaking on PUNCH Online interview programme, The Roundtable.

The Afenifere chieftain further stated that Nigeria can not be productive under President Muhammadu Buhari government until the restructuring of the country.

He said the president has his personal agenda for not wanting to restructure the country despite overwhelming clamour for it by the people of the South-West, South-East and the South-South geopolitical zones.

Adebanjo said, “I have been saying it all along that Buhari should restructure this country to federalism, let us agree on the way to live together in peace. I don’t want the country to break.”

‌“If there is equity in this government, nobody will want to leave but where there is oppression, you will like to go out.”

“I and Afenifere campaigned for Buhari in 2015 when he said he was going to do restructuring. I have been repeating this and they have not denied this. Nobody hates him. At that time, we thought he was the most honest man in the country. We supported him against Atiku. And now, he gets there with his private agenda.”