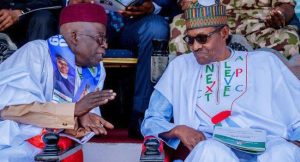 President Muhammadu Buhari has been reported called on by members of the Aso Rock cabal to place the National leader of the All Progressives Congress, Bola Tinubu, on a watch list.

According to Saharareporters, the group which is led by the President’s nephew have accused the former Governor of Lagos State of sabotaging the war against insecurity in the country and instigating people from the South-West region and Nigeria in total against the Buhari-led government.

The cabal called on Buhari to direct security agencies to investigate the recent activities of the APC stalwart.

A presidential source told SaharaReporter, “They accused him (Tinubu) of instigating Nigerians against Buhari. He was also accused of sponsoring different groups to cause unrest across the country.”

“I think they (cabals) think this is another method to tame Tinubu ahead of the 2023 elections after a lot of noise in the APC in which his allies lost out.”

“They are doing everything within their power to stop the President from supporting Tinubu’s ambition come 2023.”

Although Tinubu is yet to declare his presidential ambition openly there indications that he would love to succeed Buhari in 2023.

It is unclear if President Buhari would support the ambition of Tinubu in 2023 as the APC candidate for the next presidential election.

Meanwhile, a group alleged to be sponsored by some northern politicians during the weekend called on the police to arrest Tinubu over the ultimatums issued to Fulani herdsmen in Ondo and Oyo states by Governor Rotimi Akeredolu and a Yoruba activist, Sunday Igboho respectively.

The group, Northern Patriots Assembly, accused the APC chieftain of being responsible for the crisis between Yoruba youths and Fulani herdsmen in the South-West.

Recall that the Ondo State Governor last week directed herdsmen to leave all forest reserves in the state within seven days.

On the party of Sunday Igboho, he asked herdsmen in Ibarapa North Local Government Area of Oyo State to leave, blaming the leadership of the Fulani for being behind the rising insecurity in the state.

“All these threats, suspense and deliberate heating of the polity, we believe are at the instigation of the so-called South-West political leader, Mr Bola Ahmed Tinubu, all in the name of politics,” the group said.

“We cannot but see the hand of Tinubu in all these because of his inordinate ambition to become the president of Nigeria and his penchant for bellicosity anytime he is targeting a political prize horse. Tinubu, as we all know, is seriously eyeing the presidency come 2023. But as we inch closer to the election year, it is becoming glaring to him that the odds do not favour him.

“Instead of accepting his fate quietly as power does not come from man, Tinubu is trying to upset the apple cart by heating up the polity and making the country ungovernable. This is with the hope that after he has turned the country upside down, he will be called to negotiate, to state his demands where he will insist that the presidency be handed over to him or the mayhem continues.

“This is self-serving and an unpatriotic act that should be condemned by all. A country cannot be set ablaze just for the ambition of one man no matter how stupendously rich he thinks he is.

“Last year, the former Lagos State governor was also fingered as one of the sponsors of the #EndSARS protests which almost destroyed Nigeria. Many online media reported at the heat of the protests that Bola Tinubu was sponsoring the #EndSARS protests in the Southwestern part of the country in order to cripple the country and bring the administration of President Muhammadu Buhari into disrepute on the global front.”